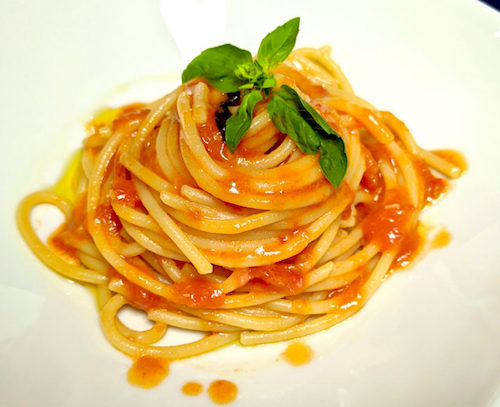 Have you ever been lost in the Italian rice fields? You only realize that Italy is the biggest rice producer of Europe when you drive long them. But Greece also produces rice, although a lot less than Italy. When you compare the Greek kitchen to the Italian one you find that the ingredients are mostly the same. Spaghetti, tagliatelle, penne, tortelinni, ravioli, who doesn’t know these Italian pastas.Chilopites, kritharaki, makarounes or flomaria: these are only a few of the many pastas that appear on the plates in Greece. Even though the average Greek eats far less pasta than the Italian, these wheat wisps are nestled deep into the Greek kitchen.

Greeks are crazy for lemon, which they, along with the indispensable salt, drizzle over everything. Italians finish most of their dishes with their famous Parmesan cheese. It shows in the BBC series Two greedy Italians*, where they grate a lot.

The duo Gennaro Contaldo and Antonio Carluccio, two cooks who where once the owners of several restaurants in England, and to whom Jamie Olivier owns a lot, return after 50 years to their motherland Italy to research the changes in the food world. The big fatty and always hungry Antonio who bosses Gennaro around, the bickering and the ocean of information about different parts of Italy make this a delicious cookery program. Because yes, they also cook. And how. In idyllic locations – a lot of them outside – in a snap this duo conjures up uncomplicated, mouthwatering dishes: all very Italian. Tough most of the ingredients (or Greek counterparts) are also to be found in Greece. In between dishes, the two cooks visit all kind of food producing people – from simple shepherds to high tech pasta producers, from people catching frogs to Chinese farmers bringing their vegetables to the Italian markets. They do not stop tasting and sometimes you may think that they only feign loving everything they try: maybe the dishes are uneatable, the cheese too salty, the meat too tough. But when you see them cooking, juggling around with the ingredients, your mouth starts watering and all you want is to immediately go into the kitchen to imitate them.

The pair continuously is looking for fresh local dishes and what bothered me was that while making pizza and pasta dishes with tomato sauce, the sauce came from pots. I strongly believe in using fresh ingredients which makes my winter dishes pretty lacking of tomatoes, but now I believe otherwise. Tomato sauces are made with summer ripe tomatoes, in order to catch their best sweet flavor. Unless in the summer you have hours to cook tomatoes into a scented sauce – it’s no sin to empty a tin of tomatoes into a pan: it’s even often preferable. Italy consumes oceans of tomato sauces. Greece also knows how to use it. Pasta, meat balls, feta and shrimps, sausages, aubergine, they all get submerged in a lovely red sauce.

One of the few things missing in the Greek kitchen is the dried ham (in Italian prosciutto crudo). When Gennaro and Antonio greedily had some slices of this delicacy gliding into their mouths, it made me sick with jealousy. The only Greek meat product coming near to prosciutto is pastourma, that came with the Greeks who were thrown out of Turkey in 1923 – bringing their own recipes, amongst them the one for dried spiced veal meat. It is said that pastourma originally was camel meat, hung with bunches of herbs from saddles, so while travelling by horse or camel the meat was dried in the air. In Skala Sykaminias there is a restaurant that used to produce pastourma with fish: ‘like angels on your tongue’ (Dutch proverb). But the fish was just hanging to dry on the washing line.

You keep on salivating and smiling when you follow the delicacies snacking and cooking of Gennaro and Antonio through Italy. It gives plenty of inspiration to do Greek cooking just a little differently. The episode The Alps and Arrangiarsi, where Gennaro and Antonio learn how to make prosciutto, should be mandatory for the Greeks. In Cyprus they do make their own dried ham: luntza, chiromeri and tsamarella (from mountain goats). If the Cypriots can make it, the Greeks can also make it. Hoppa, on your feet! I want Greek prosciutto!

*The series Two greedy Italians can be watched on YouTube.