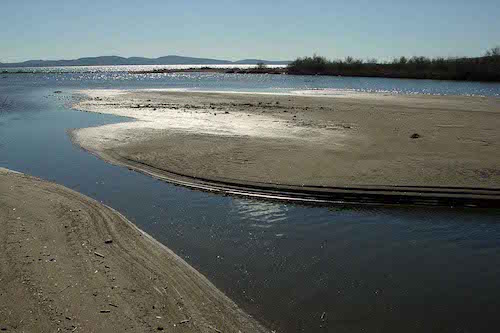 Sometimes I think that it’s not only people who are hit by the corona crisis. Nature may also have had a few blows. The weather keeps on yo-yoing with summerly temperatures and icy winter winds, which might be the cause for many flowers being a bit confused and hesitant to grow. Orchids are pretty late, anemones have to keep distance or are in a severe lockdown under the ground. In this second corona spring, the floral splendor is very poor.

The only plants not seeming to care are those illegal entrants from South Africa — oxalis (Oxalis pes-caprae), who just like the South African corona variant show lots of aggression in conquering many fields. Only the blue grapes try to resist, but their sky-like blue colour is many times trumped by the smashing bright yellow colour of the Oxalis.

And then — the sea. For weeks the sea has been at very low levels. Small islands now have footpaths to the mainland, submerged archeological walls rise from the water to finally take some good breaths; many parts of the coast now accessible over low whitewashed rocks. The seagulls were happy twittering about their new walking areas.

After the Samos earthquake (20-10-2020) the island elevated some 18 to 21 centimeters. In recent past there was a lot of rumbling and grumbling in the Greek ground, but not so bad that most of the tectonic plates became elevated.

The low level of the sea must have been orchestrated by the moon and the stars. If they are indeed the culprits, I wonder if they too have been affected by Corona. I never seen the sea so low for so long. I wonder where all the missing water has gone. Did an angry God take out the plug? Or have malicious clouds taken so much water in preparation for a lethal deluge.

For the fast shrinking fish population Turkey organized a ‘disco boulevard’ just across from Eftalou. At least, that is what this endless row of relentless huge fishing trawlers remind me of. At night they loom there, happily swaying on the waves with huge white lights (some red or green) illuminating the sea as if it were a ballroom. You could almost think that it’s this catching of so many fish that has caused the sea level to lower. (The Lesvorian fishermen complain that, in any case, there are no more fish to be caught.)

Corona times confuse. This weekend was carnival, but it was forbidden to celebrate. All those fancy days of parties, before Lent sets in, have passed without no remark, making you lose any sense of time. On Kathara Deftera (Clean Monday) kite-flying was allowed, but you were not supposed to take the car to go to a flying field: taking dog, kids and kites out for walk is only allowed by food or bike from the house. Most of the oysters and other shellfish from the Gulf of Kalloni, traditionally served in the restaurants in the days before and during Lent, now go straight to Athens. Restaurants have been closed for nearly half a year. Possibly you might find some shellfish in the fish shops in Kalloni and Mytilini, but nowadays you can only shop within two kilometers of your home. Damn! I have no fish shop nor any other shop within that distance. So I may perish or resort to a diet of chorta.

We muddle on in these strange times, where not only people but also nature is upset. These are golden days for civil disobedience. Not all rules can be followed, especially on an island where Nature calls to be seen.

The sea slowly rises again, islands return being islands, ancient walls disappear beneath the waves. With Easter ‘all will be better’, says the government to appease its people. This year Greek Easter is at the beginning of May, so there’s plenty of time to vaccinate people. The plan is that by the time the Easter bunny jumps out of the tall grass, all the small islands should be immune to Corona, and ready to receive waves of tourists. Lesvos is no small island and is not part of that group. I wonder if they can stop all Greeks who have second homes on the island and are determined to do some egg-tapping with their red eggs on Lesvos. From coming here. The youth of Athens already is in revolutionary mood. Will others follow in the uprising against corona?