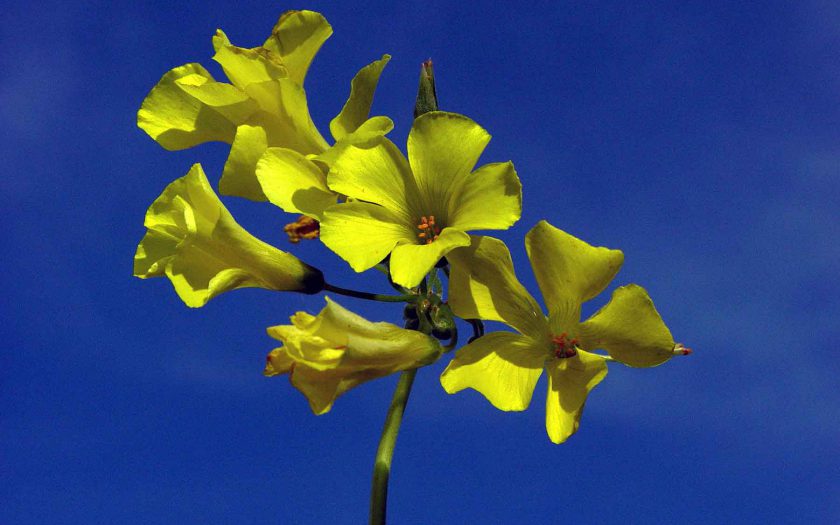 The earth growls and shakes, the umpteenth southern storm of this winter pulls at branches and roof tiles, the second layer of snow has disappeared as quickly as the wind is raging; another storm enters, this time unrooting trees with the promise of even more snow. The spring is like a daredevil, entering the island in these times.

The almond trees seem to be experts in forecasting the weather: lots of trees have waited to unfold their blossoms until after the second wave of cold. But they have to fight in order to keep all their delicate petals together in these strong gusts of wind. Just a few trees, growing in the lee of the wind, offer the nearly mythical beauty of full flowering almond trees. They look like huge pink clouds, giving you courage to face, head held high, an unsure future.

In the dark humid earth there must be a pulling and a shoving, now that all plants are fighting for their green leaves to unfold above the earth. The attractive greens of grasses and chorta slowly admit other colours: the light lilac or white-pink of the anemones (always at the head of the spring flower parade), followed by the yellow trend. Now with the wind’s voice again raging through the trees, yellow dots of the cheeky flower heads wave unashamedly above the grass. Most notably the dandelion-like Prickly sow-thistle (Sonchus asper glaucescens), Marigolds (Calendula arvensis) and Bermuda buttercup, usually just called Oxalis (Oxalis pes-caprae) are making a show and colouring whole fields of grass yellow.

Looking out over such a spring landscape might give you the feeling that you are gazing over a centuries’ old landscape. That is not true. The Oxalis for example comes all the way from South Africa to brighten up Greek grass lands. Just like people, plants do wander. The Oxalis is an established refugee.

Greece is home to hundreds of refugee plants, all nestled into her already rich flora, including the prickly pear from Mexico (Opuntia ficus-barbarica), and the saltmarsh aster (Symphyotrichum squamatum) from America.

The same happens in the sea where you will find lots of refugee fishes battling for food with the local fish. The most notorious is the Lagocephalus suezensis from the Indian Ocean, a kind of puffer fish that blows out a balloon-like belly when he feels threatened. This cute fish however is super poisonous. Some years ago, all around the island, I remember seeing ‘Wanted’ posters of this fish, warning all unsuspecting fishermen not to eat them.

Another example of a dangerous immigrant is the Asiatic Tiger mosquito (Aedes albopictus), who can be the bearer of the life threatening West-Nile virus. It is many years ago that this nasty mosquito started to sow panic in Greece (and Europe), but the threat is still not entirely settled.

For centuries the Greek kitchen has been infused with immigrants. One of them has even made it as the main ingredient in Greece’s most known dish: choriatiki salata. The tomatoes, originated in the Andes in South America, were brought by the Spanish conquerors to Europe in the 16th century. The fruit, thought poisonous, was only introduced to the Greek kitchen at the beginning of the 20th century, where it became an important ingredient, just like the aubergine and zucchini.

Lesvos is of course an excellent example of a changing landscape: it used to be full of tower high sequoia trees and amidst them wandered the most strange prehistoric elephants, turtles and lizards. All wiped away by explosive volcanic eruptions. Nowadays it’s the tourists that change the landscape along with building of hotels, restaurants, roads and beach accommodation. Lesvos however does not cater for mass tourism. This is why it still remains an ‘original’ Greek island.

These days with the symphony of thundering winds and lashings of rain, sometimes accompanied by crackling thunder storms, we are reminded of climate change, even though the weather yo-yo’s between warm and cold. Whether we want it or not, the world is always changing. Whether it is a harsh winters, refugees, or the corona virus, everything reminds us that we again have to adjust life to history and nature, like we always have.