Just a day in November 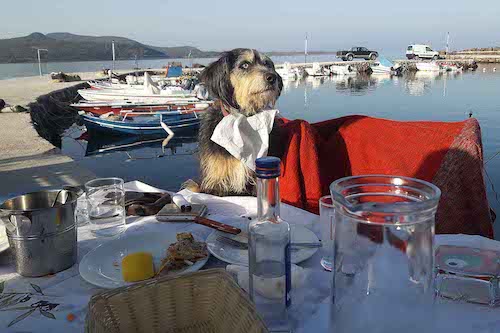 One day in November we took the path behind Chalikas, up to Lepetimnos. High temperatures and interesting little clouds made it a perfect autumnal day. Just fallen leaves crackled under the feet. After passing tens of nearly empty chestnut trees, we came across centuries’ old plane trees, which with their beautiful trunks formed of hollows and elegant bulges guarded the path. What could these trees have to tell about what they’ve seen over all these years? Did they see soldiers persecute partizans, did they secretly enjoy seeing a passionate lovemaking, did they lower their branches to comfort a distraught person?

The Turkish writer Elif Shafak dared to have a fig tree as one of her characters in her latest novel The Island of Missing Trees. It is a story about Cyprus, telling not only the story of an island divided, but also about a lost love. And about a fig tree that saw it all happening.

A magnificent book that however I quickly forgot because of the breathtaking path we were taking up to a Turkish fountain. Moody background music came from a breath of wind and the clapping wings of the black ravens that flew around, laughing on the thermal currents between the steep, grey mountain walls. Golden yellow leaves highlighting the trees made them glowing between the greenery that was scattered over the steady rocks.

Totally satisfied with this beautiful autumnal scenery, we went down to the sea that was lapping gently at the quay of the harbour of Yeni Limani. While tasty plates kept on appearing on our table and the ouzo and retsina quenched our thirst, the elderly villagers seemed to appear in a rhythm as if coming to a theater event. It started with Dimitroula who was a bit bored and walked the jetty until she saw something in the water. She started to call loudly for Yannis, who was somewhere around the harbour. After she begged him for some ten times to come over, he finally gave in and shuffled over to Dimitroula who then pointed to something in the water which we couldn’t see. It must have been something pretty interesting because now both Dimitroula and Yannis started to call out for more help to Panayotti who was around, but obviously was not interested in coming to see what was going on. He only reached for a stick that is normally used for taking sea urchins out of the water. Yannis went to get the stick and stuck it into the water, creating some tension for us because whatever it was, it didn’t came out and the two of them kept on calling for more help. Only when Dimitroula took off her shoes and rolled up her trousers in order to step into the water, did Panayotti drive his car the tens of meter to the jetty (like a real not-wanting-to-walk-Greek) and it also needed the help of a Yorgos to get a fat octopus out of the water.

Silence finally descended on the picturesque harbour, only broken a few times by the flash, flash, flash of the octopus being beaten against the stone quay. It was time for the second act: the launching of the Annoula, a fishing boat that was on the slipway of the local dock. Everybody rushed to the other end of the harbour, while two new actors appeared, holding the rope that helped guide the boat he first few meters into the water. Then all of the villagers started an endless discussion, but the boat was okay and finally continued gliding into the sea until it rocked gently in the water and could be maneuvered to the quay.

The afternoon was fading when act three started. The men climbed into their various little boats and slowly sailed towards the calm open sea. Siesta was clearly over and two women dressed in black, still rubbing sleep from their eyes, sat down beside us to have a coffee. Out of a house came a man and his wife, wearing bright pink socks, with a pillow in her hand. They also went into their little boat and took off towards the blue horizon. Just like Dimitroula, although she went away in a little white car that drove out of the village. It’s easy to guess what became of the octopus. It was – as this great song from Lou Reed says – A Perfect Day.