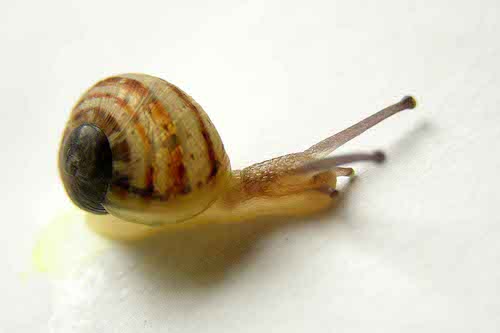 In ancient Greece people said that when the snails start climbing up the stems of weeds, it’s time to harvest. Like in the Spring, when the wild vegetables (chorta) spurt out of the earth and the snails feast upon their young, juicy leaves. Sometimes those parties get out of hand and you’re left with a garden of bald stems or a pot where the young seedlings have disappeared.

Snails do not hibernate, but ‘summernate’: for the dry months – they creep behind rocks and thick wood, in dark hollows and some species even burrow into the earth, hoping that they are safe from the sun. The well known antennas of the snails only re-emerge at the end of summer with the first serious rain falls; which has just happened on the island, halfway through October. But then harvest is well on its way. The waking up of the snails can also mean the end of picking fruit. There are Greeks who believe that the first rains encourage worms to enter the fruit. To shelter from the rain? I have no idea where this fear comes from, but no Greek will pick figs, blackberries or grapes after the clouds have gathered to wed the land for the first time after summer.

When the autumn snails assault the weeds, it is their turn to be harvested. They have their own places where they gather their food, like in the hills of Eftalou, where obviously tasty species rummage around (their houses are decorated with wide stripes). The rain has barely stopped when the snail catchers appear, hastily looking under all the bushes and within the developing mud. It is the beginning of the massacre of the mollusks. In the night the snail shells crunch under shoes and in daytime the roads are paved with plenty of crushed snails (as thin as French crepes de Bretagne). After two days you begin to believe that no snail can be left alive, but on a beautiful morning I picked up one, then another, and another and I was amazed that within a quarter of an hour I had a bag half-full of wriggling snails. I gave the bag to the first wandering snail catcher I met that morning.

I have never managed to prepare them for dinner, because that requires a certain ritual: you incarcerate them for several days, feeding them with a little flower so that they cleanse their insides. Only then they are thrown into boiling water or on the fire, mostly still alive, although according to experts, because of their state of starvation, they are back into ‘summernate’ mode. I am not proud of myself: not daring to stand next to a pan full of screaming snails, yet once they are turned into a tasty dish, I love to eat them.

Snails only seem to be loved when they are served for dinner amidst other ingredients (like in a local recipe with quinces, tomato and onions). It is not well known that their slime has medicinal powers to heal skin and wounds: that is, according to Hippocrates. There are always snails crawling around and even in my house and recently I wondered if a snail were to creep over my scar – would it use its magic powers. But I don’t believe that I have the courage to endure such a ‘healing session’. Some people believe that a snail also has aphrodisiac gifts. But I bet that that is only for the cooked snails.

Eating snails also offers some small revenge for all the damage these mollusks have caused in my garden. Each year when the first raindrops fall from heaven at the end of summer, I seriously think about catching every snail from the garden, putting them on a flower diet in preparation for a festive dinner. But then I hesitate, because the popular species that roam around in Eftalou are quite different from the ones that make my garden unsafe. Even though those that inhabit my garden look like the real French escargots (which are prepared with garlic and parsley butter). So I drop the plan to catch them and in spring I watch with gritted teeth as the next wave of snails eat their way through my garden. No number of snail dinners can prevent that.