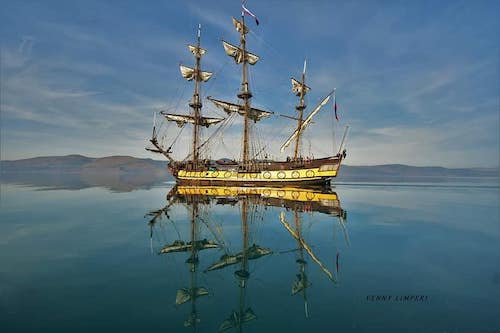 If you ask a Lesvorian to name a famous boat, most of them will answer: The Georgios Averof. On November 8, 1912, this armoured cruiser led the Greek fleet to free Lesvos from the Ottomans. The ship was launched in 1910 and was for nearly half a century the flagship of the Greek military fleet. In the beginning ‘The Lucky George’ was the most modern battleship cruising the Mediterranean. It survived two world wars and several international crises, including the Suez Crisis. In 1952 the ship retired, to be recommissioned in 1984, this time as a museum boat in Athens (in Paleo Faliro). In 2017 it sailed with an exhibition to Thessaloniki, being one of the last steam ships still challenging the waves.

At the end of the 19th century steam machines brought lots of changes to the industrial world as well as in shipping. Sails were replaced by mighty, heavy smoking chimneys and Mytilini became rich. That prosperity has vanished into thin air, but still the harbours of Mytilini are worth visiting, even though there are no longer steaming merchant ships anchored. Today drab grey naval ships, curious NGO boats, impatient ferries and hardworking small fishing boats lay gently rocking at the quays. On the Gulf of Kalloni it is more boring. There used to be plenty of work on this inland sea in the form of transporting salt and resin. But that has all gone. Today, at Skala Polichnitos, the centre of the shellfish trade, there once in a while can moor quite a big ship, but elsewhere there is merely the soft purring of small fishing boats that break the silence on the Gulf of Kalloni.

In ancient times the Gulf was known as The Lagoon of the old Pyrrha. This town however disappeared during an earthquake into the waves of the lagoon; the quakes creating the big opening to the open sea. This is how we got the Gulf of Kalloni. Aristotle for years wandered around the lagoon and took Theophrastus in as his pupil. Thanks to their observations of nature they now are seen as the pioneers of biology.

Last week the island was plagued by low clouds, creating fog that gave the landscapes an intense mysterious air. Now just imagine that you’re at the Gulf of Kalloni and suddenly, out of the clouds, a huge old fashioned sailing ship appears.

In 1703 the Russian Tsar Peter I ordered the making of the frigate Sthandart. It was built by the Dutchman Vybe Gerens. The tsar oversaw the works closely and the ship was ready within five months. It became the flagship of the Russian Baltic fleet and the darling of the tsar’s family: all their yachts were called after the Sthandart. When Peter’s second wife, Katherine I ordered the ship out of the water for a checkup the hull broke, bringing an end to this beautiful boat. Katherine swore that the frigate was to be rebuilt, but probably history got in the way and the building of a replica only started in 1984.

When the replica of the Sthandart, now an international schooling boat, came to visit the Lagoon of Aristotle a few days before Lesvian Liberation Day, some people must have felt they were on the set of the Pirates of the Caribbean. Its appearance did hark back to pirate times, when not only the sea but also the Gulfs were unsafe because of pirates coming from all corners of the world. One of the most famous pirates in history, Barbarosso, came from Papados, on the Gulf of Gera.

I like to drive round the Gulf of Kalloni. The light can be incredibly nice and shed surprising colours across the soft coastlines and dark contours of the mountains towering behind. Although it might be the place that hosted the roots of biology and the place famous for its pretty fat sardines, it is the capital that always attracts most people. Which made the surprise all the more, to see such a sensational boat gliding over the quiet Gulf of Kalloni. The Sthandart wouldn’t have stood out as much in the busy harbour of Mytilini, while it obviously felt at home in the Kallonic waters where it paraded over the waves like a proud peacock. It was a brave idea to bypass the capital.