From parrot fish to zebra fish 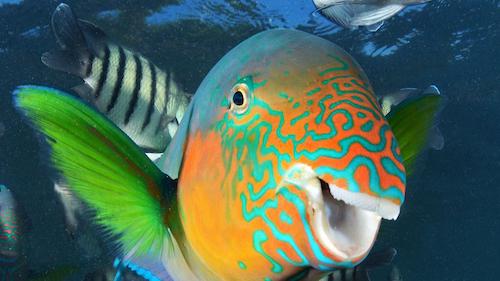 There are plenty of great annual festivals on Lesvos. Apart from the small local celebrations around the patron saints of churches, monasteries and villages, in August in Molyvos there are the Arion Guitar Festival* and the Molyvos International Music Festival** (which is spreading further afield), Lesvorians love music and all sing aloud with the more than known Greek songs mostly performed, before they jump up to dance. But first their soul has to be satisfied with food.

Greek food is simple and fresh, tasty and heavenly, as was evidenced at the yearly Lesvos Food Fest that takes place every July since 2017. This year Molyvos fabricated street food, like the famous Spanish fried anchovies – boquerones (in Greek called gavros tiganitos), and imam on a stick. Petra cooked dishes related to a traditional wedding, where music and dance were clearly more powerful and Stipsi presented various dishes centred on olive oil. In Skala Kallonis they taught how to eat the famous salted sardines (sardelles pastès) – of course with plenty of ouzo.  In Mytilini specialists explained culinary properties of local natural ingredients. As the capital of ouzo, Plomari shared some of its ouzo-secrets, Polichnitos had sweet and salted snacks based on cheese and other dairy products and in Eresos it was explained how to make syrup, called vrasma, that traditionally is made of figs or grapes and mainly used as sweetener for cakes.

And then the sardine festival of Kalloni*** is yet to come: basically a food fest where thousands of fishes end up on a grill and where again lots of ouzo will be sprayed around. Sardines from the Gulf of Kalloni are at the apex of Greek culinary products – they are fat and very tasty – a fact that has to be celebrated.

Each spring I look out for the first sardines, since they are not served in the winter season. As a change though, I do like to eat bigger fish with white meat. You may think that you have tasted all the kinds of fish that frolic in the Aegean. However restaurants often surprise you; like yesterday a waiter recommended Skaros, a fish not always available. The fish was easy to describe: a parrot fish who can have all colours of a rainbow. The fish loses those sparkly colours once on the grill. Also a characteristic of this merry looking fish, its parrot-like-mouth, looses shape on the grill. This slightly crooked mouth is used to nibble at the algae on the coral. The calcareous coral that comes with it, cannot be digested and comes out as fine white sand. A parrot fish can poop as much as 250 gram of sand daily, contributing to bright white beaches. It would be an idea for Lesvos to get a parrot fish farm: pebble beaches are in the majority on the island, a few more white beaches would certainly attract more tourists.

It seems a pity to put your teeth into a fish that not only is beautiful, but also has useful properties. You do not think about that when, with a growling belly, you listen to the waiter listing which fish is on the menu that day. He should not praise the beauty of the fish, only its good taste. Imagine if he (or she) indulged in anecdotes about each fish! For instance – a sepia (Soupia) can take on various colours to camouflage itself from its enemy, or did you know that when it falls in love the Soupia takes on a zebra print skin. Or what if the waiter were to  praise the brown grouper (Rofos) as a tasty cuddly fish because of his big thick kiss-lips.

Imagine the waiter showing disgust whilst talking about the grimy slimy monkfish (Peskandritsa) who loves to hide in the mud on the sea bottom. Or what if he starts to explain that the dangerous looking spines of the red scorpion fish (Skorpina) are not poisonous but only harbringers of pain. Or if he were to offer school shark (Galeo) and forget to mention that this species does not eat people, but is rather the sweetheart amongst the sharks (as are so many members of this so feared fish family).

Maybe it’s just as well that there is not a fish festival where all these tasty but sometimes beautiful or dangerous looking fish are displayed. For I might stop eating fish. I cannot forget that recently I ate that parrot fish. Not because he tasted so sweet and tender, but because of his colours and his sand making skills.