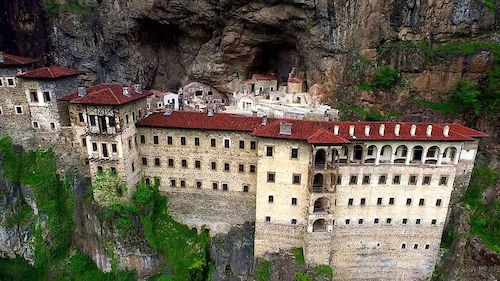 Centuries before Jesus was born Greece and Turkey didn’t exist. Those regions were comprised of kingdoms like Beoetia, Achaia, Lydia, Troy or Phrygia, a state in the middle of today’s Turkey. King Midas, with his donkey ears, once reigned over that ancient land. It was also ruled by the ‘Mother of all Gods’: Cybele (also goddess of the wilderness, animals and mountains). She is often depicted in the company of lions, who pulled her wagon when traveling over the world.

She was a tough and wild lady, loving dance, music and parties. The story goes that when she didn’t respond to her lover Attis anymore, he castrated himself and died. Men who wanted to serve her as priests castrated themselves during day’s long parties, where  alcohol and hallucinatory drugs were taken like cheese sandwiches.

From the seventh century BC onwards, Cybele was equally feared and loved in Hellenic countries, but she never got a proper invite onto Olympus. She had to function as a ‘foreign’ goddess with a shrine here or there – for instance her shrine in the castle of Mytilini and another in Mesa (close to Agia Paraskevi), although there she had to share the huge temple with Zeus and Dionysus. There probably were many more places where she could be worshipped; plenty of her statues have been found in Lesvos and throughout Greece.

She was more revered by the Romans who loved this Big Mother and worshipped her along with others as a protector of cities. It was through the Romans that Cybele entered the pre Christian era – her last years. Some scientists consider Cybele as the predecessor of the Holy Mary. This immaculate virgin wasn’t the mother of all gods, but of Jesus, the son of God. No longer a wild lady, more of a prude, a timid virgin. I cannot imagine her dancing wildly. Leave the dancing for the Greeks on August 15. That day the orthodox church celebrates the Dormition of Mary (according to the Catholic Church she ascended to heaven that day). In Greece this Maria-event is, after Easter, the biggest religious celebration of the year.

Mary died somewhere between 36 and 50 AD, in Jerusalem or Ephesus, which brings us back to Turkey. Ephesus is not far away from where Phrygia once was. Mary is better known in Islam by her Armenian name Maryam, but she is far less popular than in the west. Although even in Turkey  there will be crowds taking to the road on August 15 to get to the house of Mary. This was discovered in 1881 when a nun, without ever having left her country Germany, had a vision of a place on the Nightingale Mountain not far from Ephesus. The House of the Virgin Mary now attracts hundreds of pilgrims from all over the world.

Also attractive to Turkish pilgrims is the Monastery dedicated to Mary in Sumela in Trabzon. It is an impressive complex built against a steep mountain slope, 1200 meters high. The monastery dates to the third century, built by two monks to house an icon of Mary. Having been restored more than once in different centuries, the mighty walls still stand, overlooking a superb landscape. In 2010 the Turkish government allowed, for the first time in many many years, a service in honour of the Dormition of the Virgin Mary on August 15.

Most of the countries from ancient Anatolia, like Phrygia, later became Hellenic places. Around the 5th century most of the people in Asia Minor spoke Greek and practiced a Christian religion: Greek Byzantine. From the 11th century more and more nomadic Turks entered this mighty Byzantium and had acrimonious relations with the Greeks. By the 14th century power was fully held by the Ottoman Empire, until a century ago when revolutionaries founded the today’s Turkey. The present Sultan has the belief that all Greeks island stretched along the Turkish coast belong to Turkey. But considering the history of Cybele and Mary, it’s obvious that West Turkey has a very long Hellenic history. The Sultan should think that over, especially when in Turkey on August 15th thousands of pilgrims will be visiting Mary.