Country of beach and ashes 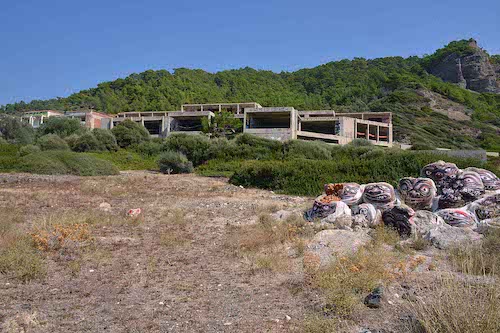 The longest beach of Lesvos is in Vatera. Popular with Greeks who have a second home there to resist the summer heat; Vatera ironically is one of the hottest areas of the island. In high summer, the beach’s fine sand is a no-go area for bare feet. It stretches some eight kilometers from Agias Fokas, a hamlet with one tavern, a small harbour and a nearly recognizable temple dedicated to Dionysus. From this corner some dirt roads lead to Polichnitos and Nifida.

At the other end of this long stretch of beach, where the road continues to Stavros, is the large unfinished hotel Lesvos Palace, where years ago during a successful festival, graffiti artists put their art on the once empty walls of the spacious receiving halls and hotel rooms. This ‘Open Air Graffiti Museum’ has various collections of  paintings, some of them fading with time, other new ones appearing. The beach ends there with huge rocky walls, which block the passage to Drota, a small idyllic beach with a hamlet formed of Greek holiday homes, only accessible by sea or via an endless winding road from Akrassi.

The road from Vrisa to Vatera intersects at about midway along the beach road, where most restaurants and a handful of shops have settled to make it more fun for the increasing number of visitors. Vatera used to be a particularly empty part of the island, with just a few holiday houses, where Greek families spent their summers. Now there are some hotels, beach bars and restaurants, and a water castle in the sea for children.

Now that the fire has raged over it, Vatera seems as empty as it once was. Some houses turned into ashes, along with one business, but most damage is above Vatera. This area with large fields, olive groves and pinewoods creeping over smooth hills, where tulips grew between the trees, where lots of mushrooms hid in the autumnal leaves, where sandy paths provided a great hiking area, with great views as far as  Stavros – all now, like Vrisa, this afternoon was evacuated, in danger from the forth raging of the consuming flames.

It is not the first time that Lesvos has had to deal with fire. Agiasos got burned down at least twice, as has Megalochori (for some time it even carried the name ‘Burned Village’ [Kameno chorio]). Small fires leave scars that can be accepted, big wildfires offer sad viewing for years, though nature always recovers. The beautiful coastal road along Vatera beach with its by the wind-shaped pines has been hit hard; the fire even crossed over the road to scorch the beach. I do not know if the fire spared the Graffiti Hotel, but the great landscape in that corner will be scarred for years.

Five years ago a heavy earthquake smashed to pieces most houses of Vrisa. Many of its inhabitants then had to move to Vatera. Two of the newly burned down houses belong to some of those earthquake victims. How sad can be fate. And again fate knocks on the door of Vrisa. The partly restored village is now under siege by a sea of flames.

The fire started in three places at the same time, making one think that the fire has been set on purpose. I wonder if the arsonist had reckoned on such a catastrophic outcome. I find it hard to understand that there are people not having respect for fire and not caring for the effects of such a big fire. Not only nature gets destroyed, lots of people are left desperate.

Many people are now fighting the fire trying for a second day in hope of stopping the flames that are slowly moving towards the centre of the island. Let’s hope that Vrisa will win the battle without being harmed and that the fire can be stopped there.

(On the third day there still is a fire to fight against, although Vrisa and Stavros have been saved from the flames. There is hope that the fire will be under control this very day)