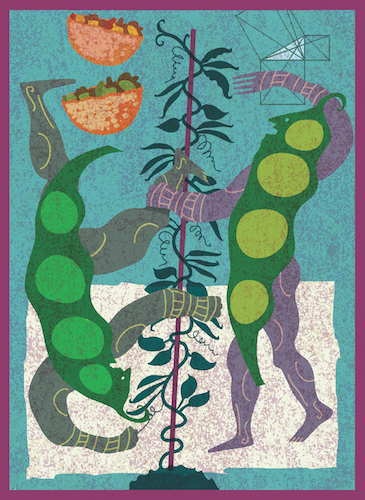 (‘Bread and beans’, designed by Sylvia Weve for the cookbook Almost Greek)

The colourful carnival days – in Greece called Apokriés – began a while ago and will end this weekend. Apokriés, like the Latin word carnival – means a farewell to meat. During the three weeks of carnival you may eat whatever you want, before the forty days of Lent. In the second week (Kreatini), the highlight is Tsiknopempti, also called Grill-Thursday, the Thursday when the air will be full of the scent of all the roasting meat. In the third week (Tiriní) lots of cheese is eaten, because dairy products are also banned during Lent.

It could have been that Dionysus invented carnival. This god of wine and parties celebrated the beginning of new life in spring. Another explanation may be that someone once thought: let’s help the spring and chase the evil spirits away by dancing and making music, thus celebrating their expectations for a rich harvest. Whatever the explanation for carnival, lots of cultures now celebrate it with great and colourful festivities, full of dance, music and disguises.

In Greece it’s the city of Patras that is reknowned for its carnival festivities, as is the small town of Tyrnavos which is reputed for a very special carnival tradition. When you want to celebrate on Lesvos, the best place to go is Agiasos, where music, dance and theatre together have a long history.

The transition between the carefree carnival days and the sober Lent period takes place on Kathara Deftera (Clean Monday), a day when there is still some carnival celebration, a day when families have picnics and fly kites, but also a day when the fasting starts: when animal products, fish and meat, give way to shellfish and lots of vegetables.

There are vegetarians who ask if restaurants in Greece have vegetarian menus. Then I have to laugh a little because if there is a country where a vegetarian can be a king – it is Greece. Greeks love varied dinners and usually eat more than one kind of vegetable a meal. They are masters of cooking vegetables: from salads to cooked cabbages.

That’s why the period of Lent is not such a burden: salads, pulses and shellfish, they form great meals! Beans are an especial favourite (and chick peas). In all forms and colours, they find their way to the dinner tables: gigantès (butter beans), black-eyed beans (mavromatiki), white beans in tomato sauce, fava (creamed peas or broad beans) or fresh green beans. You will be amazed how well Greeks can prepare beans. In ancient times they even had a God for beans: Kyamites. This somewhat mysterious god who was responsible for the growing of beans had his own temple in Attica, on the road from Athens to Eleusis, where parties were thrown for the goddess of the harvest, Demeter.

Some Greeks even thought beans were holy. The famous mathematician Pythagoras (570 – 495 BC) who came from Samos, was also a philosopher, a sage and a reformer with many followers. Possibly in his time his group was seen as a sect: these Pythagorians lived according to strict rules: not wearing clothing made from animals, anything that fell from the table was not allowed to be retrieved and they were forbidden to eat beans. Pythagoras believed that our ancestors lived in beans (a belief that he may have learned in Egypt where it was believed that the dead travelled through the stems of the beans to the afterworld). At the end of his life Pythagoras lived in Crotone (nowadays in Italy) and when the locals, in revolt against the strange ideas of the mysterious Pythagorians, attacked their school, Pythagoras had to flee into a bean field where he died. Scientists disagree about the cause of his death: he may have been caught and murdered because he run too slowly through the bean field (afraid to step on a bean), or he may have taken refuge in a temple, where he died from starvation.

I take it that there are no longer any Greeks who believe in this philosophy: especially during Lent when mountains of beans are consumed. Other favoured dishes are wine and cabbage leaves filled with seasoned rice (dolmadès and lachanodolmadès), wild vegetables (chorta), and of course squids, calamari and cuttlefish, sometimes cooked with vegetables or stuffed with seasoned rice. Plenty of shrimp is used for garides saganaki (shrimps with tomatoes and feta from the oven). And there are shellfish, here on Lesvos, from the bays of Gera and Kalloni, which are especially popular on Kathara Deftera. Do not be offended when they serve you not only raw oysters but also raw mussels and scallops: Greeks eat all shellfish raw.

Another traditional dish for Lent is taramosalata: a tasty puree of fish roe, bread or potatoes with some lemon juice, vinegar and olive oil. A little strange because you are not supposed to eat fish during Lent, but the roe probably does not count as a fish, so we can enjoy this kind of Greek caviar.

Fast during Lent?! It is more feasting during the Greek Lent.