Peeping at the neighbours 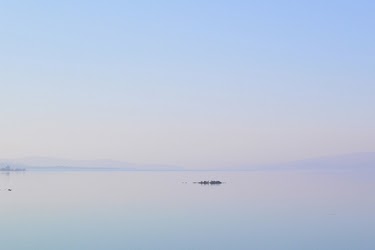 The Halcyon Days are a typical Greek weather condition. They usually take place after the New Year, sometimes in January, normally a few days to two weeks when the wind is hiding and the blue sky is decorated with a bright shining sun.

Greeks (and many other people) have myths to explain most natural phenomena and so too for Halcyon Days: Halcyon, daughter of Aeolus, God of the wind, married king Ceyx. During a bad storm her beloved king drowned and Halcyon became so distressed that she too threw herself into the angry waves and drowned. The Gods took pity on them and changed the loving couple into a pair of Common Kingfishers. And Aeolus insured that for a period in January the winds would no longer blow, so that the birds could easily build themselves a nest on the rocks and lay their eggs.

I thought that the Halcyon Days this year took place at the beginning of January when the weather was beautiful. However, the weather became even more beautiful in the middle of January, so maybe that’s when these special days took place. But the great weather did not stop then, in fact, it has even become warmer. Were the Halcyon Days at the end of January or even transferred to February, when spring weather set in to transform nature? Everywhere flowers were in a hurry to unfold their colourful petals, almond trees flowered and even the first wild asparagus rose towards heaven. In mid February the thermometer tried to reach 20 ºC, a sign for the hastening arrival of many more flowers.

It’s now so warm that even the Gods must be at a loss at what’s going on: this year we’ve had Halcyon Months rather than Days! I guess the birds are overjoyed to have such warm nests. I’m a little less happy because it’s not only the birds that are profiting from this warm winter weather; the insects too will be surviving and increasing in numbers for this coming summer. They’re already up-and-running: big buzzing bees, the first mosquitoes, delicate fluttering butterflies and fat zooming flies. And I am sure that the fruit fly dakos, responsible for the bad olive harvest this winter, is already preparing for another big offensive.

I shouldn’t complain too much because, of course, I really enjoy this lovely weather and lots of Greeks are happy that they’re not having to spend as much money on their winter heating. One complaint, however, is that there hasn’t been enough rain, leaving lots of rivers still dry. But it’s only late February, so we still have a chance for big rains.

It’s just as well that we cannot make the weather ourselves, otherwise there would be a war between the people preferring a cheap winter and enjoy the great weather and those who believe that low temperatures and lots of rain is necessary to keep a balance in nature

Anyway, the unusually warm weather is the topic of the day. They say that the Dutch speak a lot about the weather, but come to Greece and hear how much they talk about it. You don’t even have to come to Greece to see the weather. Just open your computer and click: through thewebcam in Vafios you can enjoy blue skies and splashing sunsets at Molyvos. If you are curious about what goes on in the harbour at Plomari, you can watch that through even second webcams. If you’re wondering if the weather is the same on the neighbouring island of Chios, just click and watch the weather there with a webcam in Kampos.

If you have plenty of time and you’re curious about the weather in the rest of Greece, there is a page that lists webcams all over Greece, from a busy highway near Athens, to a snowless ski track, to Olympus and idyllic beaches, through clear or dusty cameras or just as frames. For those, who apart from nice pictures, love everything about the weather (temperatures, air pressure and humidity) the weather webpage of Paleiochori in Kavala is possibly the best one to visit, with a.o. 3 cameras filming in 3 wind directions.

Do you have boundless curiosity and do you also want to know what flies through the air and what sails over the seas? Then you can even peep at sea and air traffic. But there is, as yet, no webcam that can make you smell the sweet fragrance of the blossoms, hear the whispering of the trees or the lapping of the waves on the beach, nor feel the sun on your bare skin. For that you have to leave your chair and travel to Greece.