Digging in the history of Lesvos 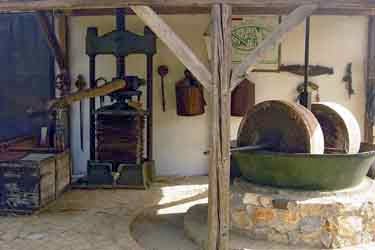 It is fascinating how archaeologists and historians piece together history. On July 18 in 1858, German historian and archaeologist Alexander Christian L. Conze arrived in the harbour of Mytilini. Not only did he research the capital of Lesvos, he also made an island tour from Thermi to Mandamados, Napi, Molyvos, Petra, Old-Andissa, Sigri, Eresos, the Gulf of Kalloni, Agiasos and the Gulf of Yera. Of course this wasn’t a tourist outing: Conze was armed with a pencil in order to transcribe old inscriptions, using them to distillate new facts for history. His travels were determined by the stories of the locals who showed him churches and houses where old stones with Roman or Greek inscriptions had been used, as well as areas where ancient artefacts could be found.

More than a century before, Englishman Richard Pococke had also toured Lesvos. This globetrotter travelled through the East in the years 1737-1741 and wrote that he had been told that the castle of Mytilini contained the stone tomb of Sappho (He was not allowed in the castle, where the Turkish Aga and his soldiers resided). His travel notes – published in A Description of the East and some other countries in 1747 – are a little meagre. The story of Conze, written down in Reise auf der Insel Lesbos and published in 1865, is much more exciting and precise. Pococke travelled by boat, while Conze travelled on a horse and made lots of interesting discoveries. It would appear that, even in those times, much was already gone of the ancient Greek world. It was probably the Romans who destroyed temples and other large buildings, using the remains to build their own monuments, a tradition on the island that only came to a stop in recent times. Rather than digging in the earth it is easier to search the walls of domestic buildings for treasuries of ancient times. Although the famous theatre of Mytilini, known in ancient times for its greatness and beauty, did survive Roman times. It even served as a model for the building of a theatre in Rome. The few remains of the Mytilinian theatre can still to be visited in Mytilini.

It was Conze who described the locations of some of the ancient Greek towns that had disappeared, like Andissa, Eresos, Arisve (next to Kalloni) and Pyrrha. He was not sure about one place: the old town of Hiera, which was described by Plinius as a big and lively city. It must have been a beautiful town at the Gulf of Yera (which was named after this old place Hiera). It either perished by disappearing into the Gulf after an earthquake or was totally destroyed by the city state Mytilini (who did not tolerate a competitor nearby).

Robert Koldewey, another German archaeologist excavated most of the treasures from ancient times in Lesvos (Die Antiken Baureste der Insel Lesbos); even he never found traces of where Hiera may have been. Both Conze and Koldewey think this old city might have been just above Perama, in a region called Chalakai. Or is Perama build on the remains of this disappeared Hiera? Until the beginning of the last century Perama was a booming industrial town; it once had the biggest tanneries in the Levant, as well as a thriving olive industry producing oil and soap. Now the place consists of huge empty buildings, most of them ready to fall down.

When you pass these faded glorious buildings, it gives you a certain melancholic feeling for older times. So many cities and buildings, once beautiful and rich, have disappeared on Lesvos. Will this also happen to Perama?

All over the island, lots of old (olive oil) factories, hotels (Sarlitza) and other milestones (Ancient Andissa) of Lesvos’ history stand or lie in ruin (when the stones have not already been recycled) slowly becoming one with nature. But in Perama there seems to be a rescue plan: more and more buildings are being repaired and rebuilt as cafés or discos. More than one of the tall and square buildings, that cast sharp shadows across the narrow streets, offer space to a small super market, a kafenion or a bar. It is fascinating to stroll through this town, hidden in shadows.

In these times of crisis, the only project Molyvos can come up with is to make a park under the impressive rock wall above which the medieval town was built*. Another town park, next to the old olive press, which was ‘renewed’ is already deteriorating because nobody cares about maintaining it. But elsewhere on the island – where fewer tourists go – residents do care for their history. Not far from Perama – just before Asomatos and Agiasos – is the fairytale oasis of Agi Anargiri: an open space, deep in a valley, skirted by huge trees where lots of water streams sing a watersong all year long. In this beloved Lesvorian picnic place there is also a church and a little tavern, now open all year round. Since last year they also moved the old olive mill of Ta Millelia to this beautiful spot and there is a watermill under construction.

Molyvos should reread its history and try to reconstruct some of it  – like the old aquaducts, a Roman project that provided Molyvos with water. The remains of these water works impressed Conze so much that, in his book, he wrote about little else of Molyvos. So, making a park in a little town that is already situated in a natural park? I think I’d rather go and enjoy the proud old buildings of Perama and have a coffee in the lovely green Agi Anargiri.

*The plan however never got realised.