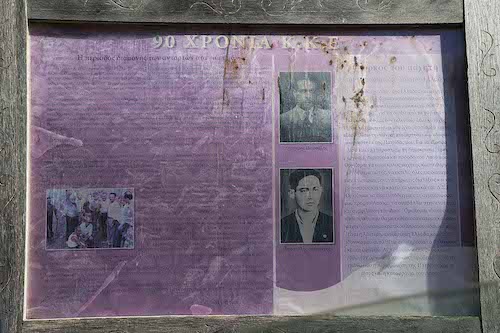 My relation to communism is one of hate and love. My first big love took me to Paris, deep into a communist nest. Friends and family, they all were into the same red party. I thought it all very exciting and remember how at a huge festival, Fête de l’Humanité, I took all the free booklets written by all those famous Russian communist bosses of whom I knew next to nothing.

It was the time that belief in the goodness of the Russian revolution was fading; though the French communists were slow in accepting how badly Stalin had behaved. The French communist party still organised holidays to Russia and Albania in order to visit factories.

No way I would visit those dark factories and departed for some weeks to sunny Greece where it was fun, hopping from one island to another. The generals had just gone and the country could finally again carelessly dance, sing and make music. The songs of Mikis Theodorakis (who has recently died), that had been forbidden during the junta, could now be heard in all the taverns.

This man was not only a great composer and musician, but also a born freedom fighter and was for some years a member of the communist party. As a child he lived for a time with his parents on Lesvos, but not as an exile (he was later several times exiled from his home) nor as a communist did he stay at Lesvos, even though this island was a breeding ground for communists thanks to the poverty that was endemic on the island.

The Greek communist party had a rough time after the second World War. The largest proportion of freedom fighters against the occupiers during the second World War were communists. When Greece started building up after the war, the communists also wanted part of the pie of victory. However, the United Nations and England, so afraid of the Russian communists, helped the Greek government and advised to ban communism. Albania and Tito’s Yugoslavia supported the Greek communists. Hence, the bloody civil war, that only ended in 1949.

On the red island of Lesvos there was a certain tolerance between the two factions and there were attempts to not harm civilians. The left fighters especially knew that without the help of civilians they could do nothing and they tried not to hurt this fragile alliance. However, even on Lesvos there was carnage.

Today when driving for hours through the woods, deep into no-man’s land, you can be confronted with a rememberance plaque honouring a freedom fighter. Like captain Dimitris Pitaoulis, who died December 1947 in the woods close to Megali Limni, (although it was by a bullet from his own rifle).

Another sad story happened in Ippeios: a Greek woman named ‘Tserkeza’, befriended to local authorities, decided on New Year’s Eve 1948 to cook for 13 hungry guerillas. When the men sat at a table in a hut, and the wine and food was served, Tserkeza left the hut, lit a cigarette with which she set alight a circle of munition that had been laid out in a circle around the hut. Six fighters died on the spot, 7 others, badly injured, managed to escape.

On the roadside outside Mandamados, in huge letters on a wall it is still written the initials of the Greek communist party: KKE: a kind of monument. Mandamados used to be known as Little Moscow and had as late as 2000 a communist mayor. The entire island still counts lots of communists, but there’s also many churches, which is a strange combination. When the Germans occupied Lesvos, the leader of the resistance was the bishop Dionysos. He declared after the war that Christians and communists together were fighting for peace and justice in the world (despite the fact that the Greek Orthodox Church was on the governmental side). It showed how self-willed Lesvos was and still is.

Even now I am surrounded by communists, even though it is no longer the biggest party on the island. The KKE of today is not Stalinist: more anarchist. But it could have been quite another story. Stalin had promised the United Nations and England that Greece would remain under western influence and that he would end his support to the Greek red party. This way the civil war was won by the Greek government, because Stalin kept word. But it was a close-call whether Greece could have become an eastern European country. Lesvos could easily have been a more fanatic communist island and the landscape would never have been filled with so many churches.

(A source for this column is the article: Buried Silences of the Greek Civil War (chapter 7 from Necropolitics) by Katerina Stefatos and Iosif Kovras)