In an octopus’s garden 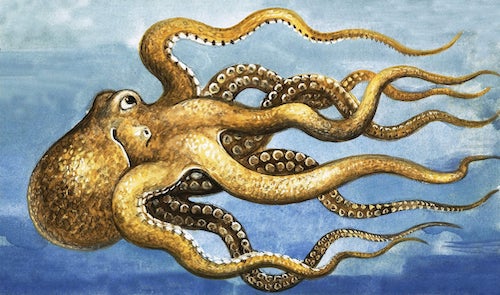 Last week it rained fish, well, so to say. They were a bit bigger than sardines (small mackerels?) and came rolling from the sea onto the beach. You just had to pick them up. Curiously a fisherman with a fishing rod was angling in the sea while a few meters further the fish were piling up on dry sand. First I thought this man had offered his catch to the seagulls, but soon I saw so many fish laid out on the beach seemingly sunbathing, that it was clear something else must have happened.

I thought of the worst case scenario: poison in the water! But a friend who had already stuffed a big bag full with fish comforted me: they came fresh from the sea and probably were too small for a big trawler that had collected its nets nearby and then probably just thrown all the babies and toddlers overboard. They were too weak to continue their merry life. Resulting in a picking-up-fish-party. Seagulls were loudly screaming out in protest, just like ‘stingy Dutch’ being afraid that there isn’t enough for everybody. Well, you could have fed a whole refugee camp with them. I didn’t want or couldn’t carry more than what was enough food for a few days for my many cats: not wanting to transform my kitchen into a fish processing plant.

I just swam a bit that morning: it did not feel relaxed amidst all those unconscious fish. Which is odd, because every day I swim with fishes. But these ones just kept on bumping into you. Coming home the fishes were enough to fill my biggest jam pot. I wanted to cook them for the cats because I wasn’t sure what had happened and I always hold a certain mistrust in things that come to you for free. I also was afraid to eat them myself, even though a lovely scent came from the pan as the water boiled.

I sometimes feel so sorry for the fish, especially when you see those big trawlers emptying the sea. That must feel like an invasion of the Taliban. When a fishing rod is used at least the fish have a choice to bite the bait or not. Probably intelligent fish never fall into that trap. Just like the prodigious octopuses who are hard to catch. You only get them after a fair fight of man to fish, with bare hands or a spear.

Octopuses are staid to be super smart animals. They change colours when they have to hide in the impressive underwater world; they build arty shields of shells, coral and stones and they have astonished lots of scientists with their Houdini-like behavior of escaping from the weirdest situations. They play, they dream, they become friends. Like the octopus from the Netflix documentary My Octopus Teacher by Pippa Ehrlich and James Reed. In the movie a filmmaker follows an octopus in an exciting underwater kelp wood in South Africa. They more or less befriend each other and the pretty images bring out lots of soft sentiments. Many people after seeing this documentary have decided that they would stop eating octopus.

I was above all shocked by the death of the octopus. I wondered if it might be better for them to be killed by a human hunter who knows how to kill an octopus. Because being caught alive between the sharp teeth of a shark, and then not being swallowed in a single ‘Jonah-in-the-whale’ bite – but eaten leg by leg, is as horrendous as the Spanish inquisition used to be.

If an octopus dares to embrace my legs with its suction cups while I walk in the sea  (as happened to a friend of mine) I certainly will not offer my hand so that it can creep around my fingers. I will scream loudly and run out of the water. No matter sweet and smart the octopus in the documentary looked, octopuses will never become my friends. I however do not wish the animal death by shark and I certainly will not be happy for a shark when he catches an octopus. So I guess I’ll continue from time to time to still eat a delicate octopus dish.