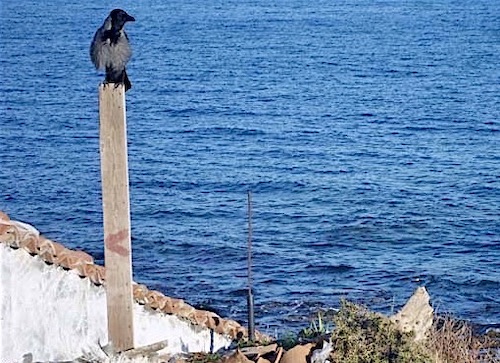 Lesvos is a birdwatchers island. Of the about 455 kind of birds, some 331 have been spotted on Lesvos. There were also birdwatchers in ancient times too; but they practiced ornithomancy: bird prediction. I found a website that explained it quite simply: by considering the flight movements of a bird, the colour of a bird and the kind of bird, you can see into the future. Within a day you can become a bird fortune teller. But you have to believe in it.

Many hooded crows fly around in Lesvos. Crows are a bad omen. When they begin to caw, it means your enemies are ready to take action, but if it calls three times you may get lucky. Flying crows mean you may travel soon.

Each day I see many hooded crows and for sure they are busy talkers; but I do not run out of luck each day, nor am I aware that I have enemies. I will listen more closely how many times they caw their battle cry, but in any case, I do not believe in such foretelling. If I did: having seen so many crows flying around, I would have travelled around the world at least ten times already.

In ancient times people were far more superstitious. There used to be an oracle on Mt Lepetimnos (Lesvos) that could see your future thanks to flying crows. Nowadays the only danger a crow presents is that he might drop a walnut on your head. Now that the walnuts are ripe, the crows all behave like thieves and loot the walnut trees. Then they sit triumphantly high on a telegraph line and throw the nuts onto the road to crack them — or wait for a car to do the cracking. I like to watch this funny scene, but I keep a close watch on the crow, lest he throw a nut at me. I haven’t forgotten that the Greek poet Aeschylus many centuries ago was killed by a turtle dropped by an eagle flying over. You just never know what can fall out of the air.

Crows are super intelligent birds. They even make tools to be able to reach for their food. They were the birds of Apollo, who used them as drones. Once he sent a crow to spy on his lover. She cheated on him, and Apollo became so angry at the messenger that he scorched his feathers. This is how all crows became black.

Another time Apollo sent a crow to fetch water from a stream. The crow met a fig tree whose fruit was not yet ripe and the crow decided to wait until the fruit became soft and sweet. Then he ate a bellyfull, fetched the water and brought it to Apollo. The god was furious for the delay and condemned the crow only to drink from the stream when the figs are ripe. This is why crows have such hoarse voices: they are always thirsty. There is however a hooded crow in Eftalou who must be very good friends with Apollo: instead of the raucous ‘kra kra’, he cries a clean ‘toot toot’. A crow with a speech impediment: I wonder how much luck can be brought by a honking crow.

When birds fly straight towards you, it means happy days are to follow. It happened to me some weeks ago while I was watering the garden with a hose. Suddenly a noisy gang of some ten birds arrived and one flew straight to me. It nearly landed on my arm but at the last moment changed its flight and flew back to its comrades, who were fluttering about, hiding in the lemon tree. Another tried to approach me and then another, but none of them managed to whisper something onto my ear. They were evenly brown, just a tiny bit smaller than a sparrow and had two rectangular black spots on their heads. Then they continued on their way and I never saw them back. As I said, I am not superstitious — so I didn’t remain awake a whole night because I was afraid what their visit could have possibly meant, — I remained awake because I never found out which strange birds they were.