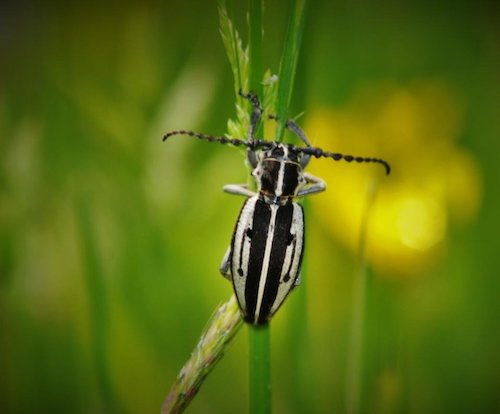 One of beetles’ main characteristics is the shield that protects their wings (elytra). There are also beetles that no longer know how to fly and have other ways to protect themselves, like the Bombardier beetle, that fires a chemical spray from the tip of its abdomen with a popping sound. Perhaps they could be useful in the battles in the Ukraine.

Some varieties of beetles can be harmful, like the Longhorn beetle that can eat its way through huge wooden beams or Weevils who devour your favourite plants, leaving only their stems or Rose beetles that can completely destroy your flowering roses.

However, most beetles are useful, like the most well known beetle (besides the Volkswagen): the cute little Ladybird. As children we learned to count their spots in order to ascertain their age. But, in fact, these spotted insects are born with, and classified by, a fixed number of dots, from two to twentyfour. These Lady beetles work seriously to remove all lice from your garden.

Dung beetles also are cleaners. They use the method of rolling vegetable waste into a ball (sometimes many times bigger than they are themselves). All beetles lay eggs, producing larvae that later pupate. Dung beetles lay their eggs in dung balls, where larvae and pupae also hide until the beetle is ready to present itself to the world. Old Egyptians were so impressed seeing beetles emerging from dung balls that they attributed creative powers to scarabs (a dung beetle) and declared them holy. Along with the pyramids in Egypt you will find endless numbers of small,  stone carved scarabs which are used as a lucky charm.

I returned from the country of the Pharaoh’s with a bag full of those amulets. I felt they had some magic and always had some of them with me – until the day that I fell over in the street just in front of a bus: but luckily all ended well. A few scarabs flew over the street, but I just left them as the minute I fell I lost all belief in their magic.

Nor did  ancient Greeks believe in the power of the scarab. Certainly their Gods had no time for them and that is why there are (as far as I know) no stories about beetles in Greek mythology. Of course Greek Nature is full of them, in all colours and sizes. I am sure I could again fill up a bag with the scarabs that roam around the island. Living beetles this time, I mean.

While groups of bird watchers on Lesvos are overexcited because of the nesting of a laughing dove in Loutra; the unique Dorcadion triste Lesvicum (ssp) shuffles undisturbed through the Lesvorian landscape. Research suggests that this black beetle, decorated with white lines, only lives in parts of Turkey and on Lesvos, in the grass lands around the Gulf of Gera, and nowhere else in Europe. A popular theory about the presence of a Turkish beetle on a Greek island is that in ancient times they hitched rides with merchant ships. In ancient times there were international ports around the Gulf of Gera, there being a thriving business with the mainland opposite Lesvos, nowadays Turkey. That must have been many centuries ago BC, because the Turkish and the Greek Dorcadion seem to have experienced different evolutionary stages. The Hellenic ladies look a lot like their partners, while the Turkish women differ from their husbands: they seem to wear a grey veil. So in a way the beetle Lesvicum should be a species of its own (Lesvos Beetle), but the Turks insist in saying that this Dorcadion triste has been imported from Turkey and therefore is a pre species.

Around 400,000 different kinds of beetles are to be found world wide. I wonder if there is somebody who knows how many there are on Lesvos? I regularly see metallic coloured beetles pass and then wonder to which beauty salon they went to have their shields painted. I want that colour on my nails! It is not rare to bump into a dung beetle rolling his ball over the road, but there are many beetles that have camouflage colours. As when looking for mushrooms, orchids or wild asparagus, your eyes have to get adjusted to see them. One good thing is that the Lesvos Beetle differs from its other black colleagues by having white stripes. It also is noteworthy that this beetle never moved far away from the Gulf of Gera. Maybe they don’t like travelling or are just very lazy. Another theory is that they do not like volcanic soil: the coast around the Gulf of Gera is pushed up earth without any lava. In any case, it is time for the Lesvos Beetle to be recognised as its own species.