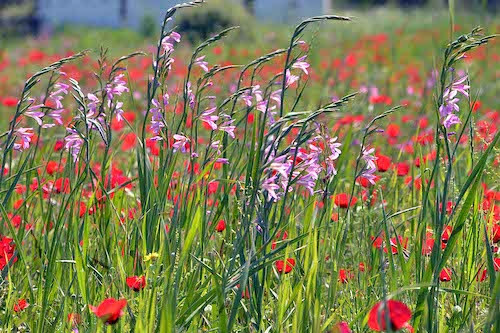 Actually the Greek Gods of the Olympus behaved like spoiled Russian oligarchs, thinking they could get away with anything due to their wealth and power. Mythology has plenty of stories about the God’s cruel punishments; rewards were seen a lot less. Their love lives were famous, their jealousies often resulting in fatality. It is good that they never were busy in stealing land from each other, for the most part being happy with their palaces up on Olympus. Were it not for that, you could compare them to Putin. They ruled over life and especially over death. When they took pity – and that they did pretty regularly – they filled the sky with dead souls who they had changed into stars or coloured the fields with people who had been changed into flowers or trees.

Greek spring – anixi – meaning to open, to be open for a new year, new harvests, new chances. But spring is in fact more of a memorial for all those unlucky nymphs, halfgods and humans that didn’t survive a love drama. According to Greek mythology most of the flowers were created during tear jerking events that regularly involved those damned Gods.

Apollo fancied the pretty nymph Paeonia, creating a temper in Aphrodite, who ruthlessly changed the nymph into a blushing peony. Apollo’s relation with the handsome Hyacinthus also had a dramatic ending, due to the intervention of the jealous god of the western wind Zephyrus. During a game of throwing discus, he blew the discus off its course, resulting in a fatal clout to the head of Hyacinth, whose blood flowed onto the earth and and from which hyacinths grew.

The beautiful Narcissus broke many hearts, including that of the nymph Echo. That is why Nemesis, the god of revenge, caused Narcissus to look in a little pool to see his reflection. Narcissus immediately fell in love with his image and didn’t leave the side of the pool until he had changed into a narcis (daffodil).

The wayward orchids are a metamorphosis of Orchis, son of a nymph and a satire. At a party he assaulted a priestess and as punishment he was torn in pieces by dogs.

According to myth  anemones were born out of the tears of Venus, who cried when she bowed over the dead body of Adonis, who had been attacked by a bear. And on it goes: the gods changed Phyllis into an almond tree, because she despaired that her newly wed husband Demophon would never come back from a trip to Athens. When he did eventually return and found his beloved Phyllis changed into a tree, he burst into a thousand tears, where upon the almond tree suddenly started to bloom.

Demeter created the poppy to be able to sleep, after her daughter abandoned her to live in the Underworld. Demeter also created the gladiolus with its sword-like leaves, to punish a bad man who didn’t believe in gods and who had refused to leave her favorite meadow. She gave him hunger, and the man spent all his money on food and then wanted to sell his daughter for even more money and food. His daughter fled and Demeter changed her into a gladiolus. Later on these pointed flowers became a symbol for the Roman gladiators.

Tulips do not come from Amsterdam, but from old Persia, if we are to believe this Persian fairy tale: Farhad, a lowly craftsman, fell in love with princess Shirin. Her father however didn’t want her to marry a simple man. The king challenged Farhad to dig a tunnel in bedrock, not believing he would manage. But he did and still the King didn’t want him as a son in law. The king told Farhad that Shirin had died, where upon Farhad killed himself. Hearing about the death of her beloved, Shirin went to see his body and then took her own life. Where their blood streamed together, red tulips sprouted out of the earth.

The images of the war that we are seeing suggests there is still no spring in the Ukraine. Russia like a dangerous polar bear gnaws at the frontiers of that country, while the population that has not yet fled shelters in cellars and metro tunnels. Maybe it is there the stories about the flowers should be told and when hunger strikes, old people will remember how to eat from nature, if there are any green places left in those destroyed cities. The gods were no sweethearts, but now we have to contend with that barbarian Putin, whose name will never ever be associated with entertaining stories about flowers, trees or stars.