About the flowers and the bees 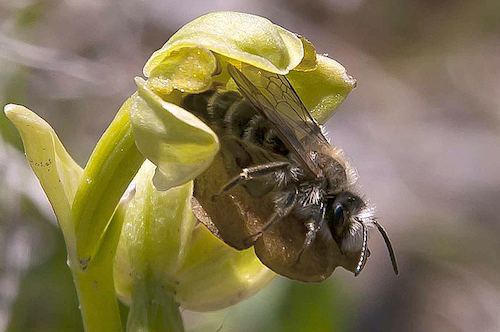 This past week I met a man who was looking for pumice stones on the beach. This kind of stone was a result of the volcano eruption in Santorini around 1600 BC and the professor (Philippe Emmanuel Coiffait) wondered if this light stone could have floated all the way to Lesvos. I had never seen floating stones and was surprised when in the summer of 2014 I first saw some of these funny objects in the sea.

Lesvos is a Valhalla for scientists: just the volcanic landscape is a treasurehold of geographic data. Apart from China, there is no other place in the world where so many petrified trees are on show. They keep popping out of the ground, like poppies. In the past year, lots of sensational discoveries have been made — several very large trees, a tree complete with branches and a kind of mass grave where the petrified tree trunks lie toppled over each other.

Colourful gatherings of birds also fly around, bringing loads of birdwatchers to the island. They mainly come in spring, because of the migrating birds whose trek involves a rest on this holiday island. The birds forage in the midst of dragon flies, butterflies, beetles and a myriad of other insects, all of which bring their own scientists.

Large carpets of flowers are concomitant with the flying and creeping empire of small animals. Lesvos is the only place in Europe where you can admire yellow rhododendrons. There are tulips, but they are also to be found on other Greek islands, like Chios. From February to June Lesvos presents a long list of different wild orchids. Those orchids and all the other flowers attract bees who fill the air with their buzzing.

There are scientists who believe that each orchid attracts its own kind of bee. Some orchids even try to look like their bees, to better seduce them. Bees also ‘cheat’: a bee sniffing about too much in the wrong flower can result in a new sub species of orchid. Some bees like to use their nose to rummage in the pollen, others use their bottoms to transport the pollen: each bee having a special relationship to a specific flower.

In ancient times bees throughout the Aegean were worshipped as gods, as evidenced by golden images of winged bee goddesses. It was Aristaeus however who was the God of the bees. One day by accident, he frightened Euridyce, the bride of the musician Orpheus. She panicked, fled, stepped on a snake and was killed by its poisonous bite. Her nymph sisters were so angry that they took all the bees away from Aristaeus. Seeing all his beehives empty, Aristaeus was devastated. God of the sea, Proteus, advised him to sacrifice four cows and four bulls, a calf and flowers in honour of Eurydice which the divine bee keeper did. New bee colonies flew out of their carcasses and now there are about twelve hundred bee varieties in Greece, six hundred and fifty on Lesvos alone (which is fifty more than in all of Germany). So you can see why Lesvos is also the ideal island for bee whisperers.

Bees ensure the propagation in nature, even though most people will associate them first with honey, another product that contributes to survival. It is said that the Greek Gods lived on honey. Zeus, who was secretly brought up by nymphs, was fed nothing other than honey. It was thought that the dust falling from the stars was the pollen that the bees were collecting to make honey. Gods used it to make Ambrosia, a drink for the immortals. During the Olympic Games honey wine was served to revive the spirits after sporting.

Honey bees are however just a small contingent amongst the the many wild bees, who mostly live solitary lives, whilst honey bees do their tasks in groups. But whichever bees are flying around, they are the caretakers of the beautiful wealth of flowers on the island.

Bees do like warmth, so they might not be bothered by the warming up of the climate. But the flowers they plunder to obtain their sweetness, will die because of heat and drought. When the warming up of the earth continues like it does now, in 2080 60% of the Aegean bees will have disappeared, has been calculated by scientists*. Without counting the mass bee extinction (Colony Collapse Disorder), that occurs when chemical help is used in agricultural farming.

I do now understand why Lesvos has the biggest amount of bees species of all Greek islands: the island is one enormous flower paradise, a Walhalla for bees. And for birds, of whom the colourful Merops apiaster is the notorious bee eater. That there also may float stones from Santorini to Lesvos, makes the island even more attractive.