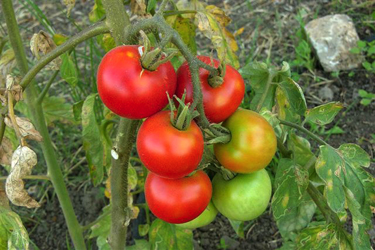 I think myself lucky that I have friends who grow their own vegetables. Every week I knock on their doors to beg for tomatoes. I can’t have enough tomatoes, especially when they are fully ripe and juicy. But this year a lot are not like that. In the shops they’re often still hard and barely red. Perhaps it is because somebody buys all the juicy and soft tomatoes before I enter the shop, or maybe the tomatoes are simply picked too early. In that case you have to let them ripen at home, never having the same results as those tomatoes that have had enough time hanging on the plant in the sun to perfect their red colour.

This summer I am obsessed with tomatoes and I cook seas full of tomato sauce. Soon my freezer will be bulging with the stuff. It is hard not to make a tomato sauce every day: slowly braise some onions, add tomatoes and a fistful of fresh basil leaves. That is a basis. Depending on my mood I add other ingredients like ginger, Greek yoghurt, local lemon, honey, marjoram, laurel and garlic, or I compose a bouquet of herbs for a Moroccan taste to make a vegetable couscous. There are endless variations with what is available in the kitchen and the garden – as long as you couple Greek olive oil with tomatoes, onions and some garlic. Of course the eyes are bigger than the belly, so with each new cooking session small containers full of sauce are banished to the freezer. Even though last winter I learned that tinned tomato concentrate is pretty tasty, so really there’s no need to keep tomatoes for the winter.

It is not that long ago that tomatoes were considered as inedible and harmful: rich people were even poisoned, but that was because they ate tomatoes from pewter plates (the acidic tomatoes leached into the lead: lead poisoning). In America around 1830 the tomato attained some fame as a love apple, but it was also said that tomatoes attracted devilish poisonous green worms. It was only in 1897 that the company Campbell introduced the first tinned tomato soup (these tins became world famous thanks to a series of prints by Andy Warhol) and the real tomato culture took a flight.

Greeks do not seem to have shared that tomato phobia. In 1827 an early Greek cookbook was published on the island of Syros, a translation of an Italian cookbook, with two recipes for tomatoes. Fried golden apples (translation of pomodoro): fried tomatoes filled with well seasoned small pieces of liver, and Eggs in golden apple sauce. Then the first tomato plant had already reached the Capuchins’ monastery on the Plaka in Athens, in 1815 (although it is not clear if it was only there for decoration). It is from this place that the tomato started its march to conquer the whole of Greece. Nowadays lots of Greek dishes contain tomatoes. To simply enjoy its gorgeous taste, just eat it as an apple from your hand with a pinch of salt and some bread.

So this summer I am engaged in a serious tomato hunt, getting the tastiest ones from my friends, before I start another tomato-sauce-cooking-adventure, or for instance marinating for some hours pieces of tomatoes in a French vinaigrette before serving, or have them bake for a day in the sun for a salad with semi sun-dried tomatoes. There are plenty of recipes around.

Sometimes I remember, with melancholy, Pirgi, where I used to go a lot: a mastic village on Chios, its little streets decorated with mosaic and garlands with small red tomatoes — a speciality of the region. So too does the volcanic island Santorini have special tomatoes. But I will never dare to enter a Santorinian summer where there might be even more tourists than tomatoes. Although I do wonder how those tomatoes taste.

It is not that bad that tomatoes appear in my dreams. Although I might suddenly wake up with the question  — what would happen if you marry beetroots with tomatoes?, which is a daring combination, just like tomatoes and figs, for which I have not yet found a perfect recipe. It might also get boring to combine all kinds of ingredients with tomatoes. It is probably better to perfect your tomato sauce. But that makes you dependent on your friends who can provide the first class tomatoes; just as Greek food shines from its fresh and ripe ingredients. Are the shops becoming too greedy and do they not longer care about quality?