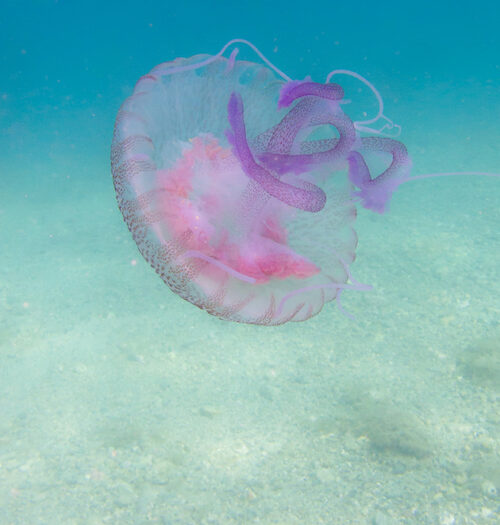 Once there were three sisters, the Gorgons: instead of hair they had snakes swarming on their heads. When you looked them in the eyes, you changed into stone. Smart Perseus decapitated Medusa, one of the sisters, and put the head on his shield to confront his enemies with this deadly Medusa visage. Poor Ariadne died like this, after she’d helped Perseus kill the Minotaur. I take it that jellyfish (their Latin name is: Medusozoa) got their name from this snake headed lady: were you to put a jellyfish with it tentacles on your head, you would look just like Medusa.

Even now, it can be dangerous to come close to a Medusa, although in Europe the risk of a fatal ending is small because the five most lethal jellyfish swim mainly around Australia, America and Asia: the Chrysaoro, the Lion’s Mane Jellyfish (biggest jellyfish in the world), the Portugese Man o’ War and the two Box jellyfish irukandji and the Sea Wasp (most lethal animal in the world).

I grew up in Zandvoort by the Sea and when the warm weather was blown in by the Easter wind, a red ball was hung up on the beach to warn of a dangerous sea and jellyfish! As a child (and still now) I hated those quivering bodies; they could be pretty big and and even the brush of a plastic bag would put an end to my time in the waves for several days.

Years later I visited the magical, but dry, hot and dusty Egypt. After seeing what floated in the Nile river – I simply felt the water with my big toe. Because I flew back over Athens I decided to extend my trip for one week in Mykonos and to wash that old pharaonic dust away in the blue Greek Aegean. The sea however was full of jellyfish and again it was only my big toe that got into the water. I will never forget how disappointed I was.

Also in Samos swarms of jellyfish regularly came to spoil bathing adventures. The only good thing is that when at one side of the island there are jellyfish, you know that the other side is jelly-free. On Lesvos I rarely see jellyfish: one or two in the sea and some on the beach.

Last week, during the first heatwave of this summer, I lay down in the Gulf of Gera, when purple jellyfish, as big as apples, started to appear. I had a good look at them but couldn’t see any tentacles. Maybe they were toddlers who had yet to develop their long stinging arms. Their colour reminded me of the famous Pelagia noctiluca, the jellyfish most recently mentioned in the papers. These rascals have invaded the southern seas of Europe, including Greek waters, and they are super biters.

Jellyfish come from an ancient animal kind. Their seed descends to the sea bottom, where it changes into a polyp, then waits for when circumstances (water temperature, food levels, new dikes or docks) are at their best – and a new generation of jellyfish will be catapulted into the sea – which can take years. So when you get a kind of jellyfish explosion (like now), it is a hidden warning that something has changed in the sea.

Fact is that jellyfish empires are doing great, partly because of too much fishing: many fish love to eat jelly fish, as do people in the Asian world where they make different dishes with dried jellyfish: yeah, I want some jellyfishchips!

Sadly eating the purple jellyfish would not stop their attack. These monsters are not for consumption and they carelessly sail with the streams, in the direction of beaches where we like to cool off. Most jellyfish stings are not felt, but should you have an encounter with the tentacles of these purple jelly puddings, your treatment of the bite should be equal amounts of baking soda and saltwater applied softly on the sting.

I think of myself as a big hero, swimming daily in the sea. I must admit, today I swam a little less, after I scrutinized the water for at least five minutes, looking for potential danger. Maybe jellyfish love mass tourism and will not send entire armies to Lesvos, because this island has only small level of tourism. Until now I haven’t seen many purple jellyfish in the water and have not needed to resort to the baking soda with the salt water treatment.