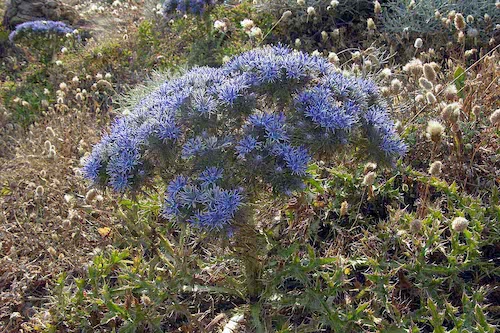 Imagine: you’re having a lovely time swimming in the azure blue waters of a Greek island and you are spotted by Zeus, who has been hit by an arrow of Eros. He takes you up to Olympus where you are expected to calmly continue your life alongside him. This happened to Kynara and even though she was promoted to the status of a goddess, she missed her life at the Aegean sea and secretly went back down to play in the waves. When Zeus saw that she loved the sea more than his throne he became enraged and changed her into an artichoke.

This is how, thousands of years ago, thistles became part of the Greek landscape. The artichoke (Cynara scolymus) whose flowers with multiple leaves and thick bottoms are considered real delicacies are the most known thistles. Many others are also appreciated as culinary specialities, like the Milk thistle (Silybum marianum), whose young leaves pepper up salads. The Sea Holly (Eryngium maritimum) has more culinary possibilities, that seem to have been forgotten by the modern cook: along with their young stems being used in salads, their roots can be used to make candy or be roasted for their chestnut flavour.

My prize of beauty goes to the Corona Balls, their real name Spiny Globe Thistle  (in Latin Echinops, derived from the Greek word for hedgehog). In many places you will find their sparkling balls of flowers, their colour changing from green to a blue as bright as the sky on a clear day. Second favourite is the Black Chameleon Thistle (Cardopatium corymbosum), that grows in the perfect form of a bunch of flowers, slowly colouring towards that same bright blue of the Corona Balls.

The Yellow star-thistle is called in Latin Centaurea solstitialis and is named after the summer solstice, because it is always flowering around June 21, the longest day of Summer. By then the landscape of Lesvos has colours of straw yellow, but the proud thistles remain standing, along the colourful Oleanders who are guarding the roads.

The young leaves of the Smooth sow-thistle Sonchus oleraceus, or zochos in Greek – are a beloved ingredient for salads in spring on Lesvos. It is said that this thistle gives strength. That is why Theseus, before fighting the Minotaurus on Crete, ate a plateful of Smooth sow-thistles. It is not known for sure if his victory has been due to the thistles.

But, if so, then we all should, (just like Panoramix did for Asterix and Obelix) get out the huge kettles in order to brew hundreds of liters of Smooth-sow-thistle-juice, in order to prepare the inhabitants of Lesvos for when the ‘Sultan’ gets it into his head to cross the Aegean Sea. He thinks of himself as the Mighty Zeus, ready for war, and is threatening to invade some Greek islands, amongst them Lesvos, Samos, Chios, Kos and Rhodes, claiming they are Turkish.

He must be happy that that the 1920 Treaty of Sèvres is no longer current; it dictated that Izmir and its surroundings were to go to Greece. This Treaty was superseded in 1923 by the Treaty of Lausanne, which fixed the borders between Greece and Turkey (even though a lot has changed already): Izmir and East Thrace went back to Turkey, most islands on the Turkish border – except for Tenedos and Imbros – went back to Greece, Italy got the Dodecanese islands and England got Cyprus. Nowhere is it mentioned that the border islands should be demilitarized (something the ‘Sultan’ now requires). He probably never read the small print of the Treaty.

The older Greeks just keep on smiling; they are used to a menacing ‘Sultan’ after many years of  mud throwing and war threats. Also the inhabitants at the borders try as much as possible to ignore the ‘Sultan’. This summer many local connections have been (re)opened between the Greek islands and Turkey, like the ferry between Izmir and Mytilini (and even Plomari).

Surprisingly the barking ‘Sultan’ this month showed another face: at the beginning of June he met with the Stalinist Tsar in an attempt to free the corn from the Ukraine. This peace making role is preferable to the screaming ‘Sultan’. Sadly he did not succeed in softening the Tsar’s stance.

Meanwhile this island arms itself with thistles. Whenever you go beyond the established paths, you risk an encounter with these beautiful, but dangerous, looking plants; in some spots they are more than a meter high. I think the ‘Sultan’ should reconsider, before he again makes claim to this prickly island.