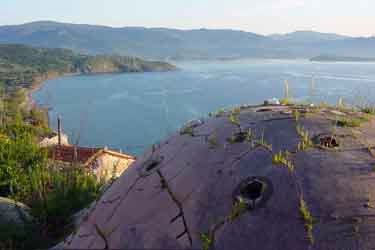 (The dome of the hamam of Molyvos)

For about four and a half centuries the Turks ruled Lesvos. This domination has left its traces, despite some Lesvorian people trying to get rid of them. In 1912 the island was freed from its Ottoman usurpers and more than a century later there remain few traces of the occupation.

In many little towns or villages on the island you will find Ottoman fountains: small and elegant stone constructions against a wall with a water tap. The castle of Sigri also belongs to the Ottoman monuments of the island. The admiral of the Ottoman fleet Karabağlı Süleyman Pasa, built it in 1757 in order to protect the region from pirates and to keep an eye on the maritime traffic.

Nowadays this fortress does look a bit small but a century ago the view of this small village was still dominated by its castle and the mosque, which was later transformed into the Agia Triada church, that can still be visited today. The village of Sigri that we now know exists thanks to the castle. In 1581 the village was totally deserted, to be filled anew with life when the castle was built.

Mytilini had several mosques: The Johan the Baptizer church (presumably built by the Genoese) was soon after the occupation transformed into a mosque named after Mehmed the Conqueror. This mosque was destroyed by an earthquake in 1867 and rebuilt as the Yeni Cami (Yeni mosque).

The Yali Cami, now a warehouse for vegetables and fruit, was built on the remains of an earlier  mosque built in 1738.

The Vigla Cami, now known as the Saint Nicolas Church, was also a mosque rebuilt after the disastrous earthquake of 1867. Its minaret was torn down in 1929, like many other minarets on the island.

Was it just through laziness or some remaining respect for a house of God that four minarets still reach into the sky of the island? You will find them in Filia, Mesagros, Skalachori and in Parakila. The one in Parakila stands like a dusty rocket in an agrarian landscape, next to a ruin that used to be the mosque. It is a beautiful building of small bricks artfully put together. How long it will remain standing? It looks lost and fragile, with holes in its elegant forms.

Parakila, at the Gulf of Kalloni, is known for this minaret and an old bridge, just called Old Bridge. No idea in which period it was built. There are not many tourists around in the winter so only a few people will realise that Parakila also is a region with lots of oranges. When you walk in the winter through the olive grows and fields down from the village, over the Old Bridge, along the minaret, colourful oranges will brightly greet you with a joyful welcome.

The other region on Lesvos known for its oranges is Thermi, a little above Mytilini, which is also known for its Ottoman history. In Loutropoli Thermi you will find maybe the biggest Ottoman monument of the island: the Sarlitza Palace. Commissioned by Hasan Mola Moustafa this luxurious thermal spa hotel was built in 1909 by French architects, but closed forty years later even though heads of states and other dignitaries were regular guests. Since then it has fallen into ruins and has become very popular amongst photographers. Rumours keep on popping up that it might be restored, but until now the hotel and its thermal baths sink deeper and deeper into a ruinous state.

Next to the hotel is another thermal bathhouse where you can still enjoy splashing around in mineral water: a century long tradition for people believing in its healing qualities. The Turkish brought their own tradition: the hamam, a place for cleaning. The thermal baths are known for their high temperatures, but the baths are in spaces that are clear. In the hamam you will find a steamy atmosphere, where you can relax after cleaning, shaving or having a massage. The normal water is heated by a fire and thus is a hamam not dependent from a hot spring.

The elegant buildings of a hamam are dominated by one or more domes, that have holes in artful patterns to let the light come in and the steam go out. Several of such domes, resting on the old ruins, can still be find on the island: in Klapados, Sigri, Ypsolometopo, Molyvos and even in Parakila you could find a hamam. The one of Molyvos is to be restored, but the rebuilding takes ages and when it is finished you may even not be able to bathe, because it is said that it is going to be a museum. In Mytilini you had several hamams, from which the Carsi hamam has been restored, serving however as a cultural centre now. There is just one hamam on the island that has been restored into a modern centre for bathing and where you can be spoiled in Ottoman ways: in Mesagros, a village between Pappados and Skopelos. If you have never had a foamy soap massage you have a perfect reason to go to Mesagros.

Looking for traces of the Ottoman culture on the island may result in wonderful walks, like the one around Parakila with its bright coloured oranges. Lesvos has many of such beautiful and historical places that may take some time to explore. I wish you a very happy 2014, with lots of new challenges.