All roads lead to Sigri 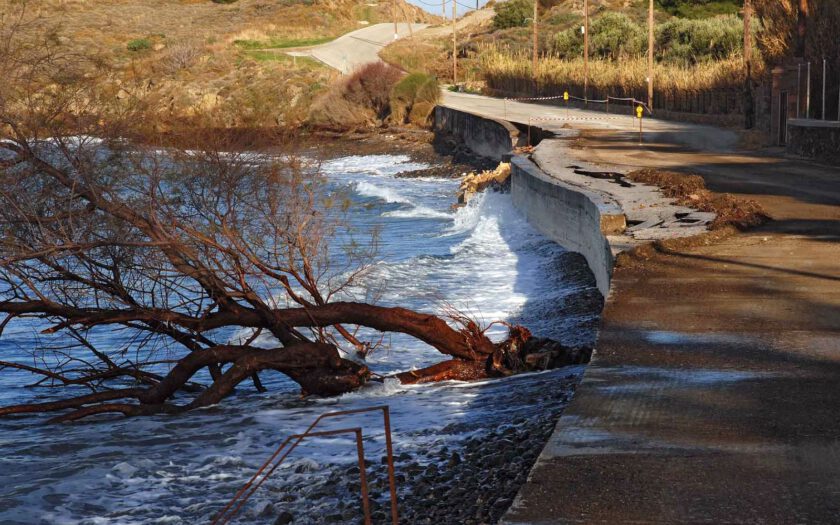 Three or four years ago the road in Eftalou was badly damaged by the winter storms. There was and still is no money to repair Eftalou Boulevard as I call it. It’s a big word for what is essentially just a dangerous street: half concrete with deep holes along the seawall and a willing future victim for the storms to come .

The Eftalou Boulevard leads to the Hot Springs of Eftalou, where it becomes a dirt road, and then goes all the way over the mountains along the coast to Skala Sykaminia. It is no busy road. In the winter you can take endless strolls without seeing one car (or person) and in the summer, even on the part where only one car can pass, its dangerous state has never caused problems. At least the fast driving devils have no other choice than to slow down.

For years there has been talk of a new road from Petra to Mytilini, the busiest road on the island (although in winter, driving this road in the early evening you’d be lucky to see more cars than fingers on your hand). The intention is to make a road bypassing Kalloni. Villages like Stipsi and Skalochori already did, because they had enough of the ‘dense’ traffic through their narrow streets, of cars just missing the toes of the visitors of their cafenions. Kalloni howeverenjoys the busy congestion, the frequent jam traffics and the danger of pedestrians being kicked off the pavements. It is the middle class who opposes such a bypass, afraid that when there is no more slow traffic, nobody will stop to shop. So up until now the new road from Mytilini has found a dead end in Kalloni. If you actually survive the hurdles of the second city of the island and you want to go on to Petra, you still have to cross a mountain range.

It may be that it will be difficult to find an easier way through the mountains between Kalloni and Petra. The existing road is okay, but when the salt vans or the tourist buses in high season dominate the road, it is no fun to drive up and down the mountains via the hundreds of sharp bends and curves. But as far as I know, nothing will change there.

They however found some money to start to build a new road from Kalloni to Sigri, a little white town known for its Natural History Museum of the Lesvos Petrified Forest. Nothing wrong with the concrete road to Sigri. It passes through several big villages like Filia, Skalochori, Vatoussa and Andissa and you rarely meet other traffic. In the summer Sigri only has a few shops and restaurants open. No cash dispenser nor petrol station, sometimes causing problems for tourists who do not know this. Is having the beautiful museum sufficient reason to build a new road in times of crisis?

Is the road too dangerous for the buses transporting the tourists to the Petrified Forest? Has some official simply sniffed out money, some of which he can put into his pocket or has the Natural History Museum of Sigri asked for a new road?

Building in Greece, especially on this island, can simply be asking for trouble. When you dig into the ground, you could encounter ancient buildings and then the archaeological service might stop the building. Digging into the ground in the West, starting the new road at Sigri, they found huge petrified sequoia trees, fruit trees, plants and petrified roots. These treasures now have to be secured by the Natural History Museum of Sigri before the building can continue.

There may be another reason for building this new road from Kalloni to Sigri. This road goes through the area that the Spanish company Iberdrola wants to use to install an enormous windmill park. Is this where they have to build some hundred kilometres of roads for the sole purpose of installing those wind turbines?

Maybe, just like Don Quixote, I see ghosts on the road, but I do question the idea of building a new road in a very quiet area, when on the old road you barely pass other cars. There are other roads that more urgently need repair or replacement. So I do ask myself if priorities are well handled.

Here in the North – the most popular place for tourists – we wait for the new water route to Turkey. For years there were only rumours but now finally in the harbour of Petra the Customs House buildings are nearly ready and we just have to wait for the customs officials and the boat. And of course the destination (it is said that last year they had a trial run, but nobody can tell me exactly where they went).

The future: the new road leading through the windmill park will bring you in no time to the Petrified Forest. Sigri will be the most popular bathing place of the island. The old road from Petra to Kalloni will be in decay and you’ll bettertravel to Kalloni via Sigri. The, by then ‘mythical’, Eftalou Boulevard will be in the sea and the surviving hotels in Eftalou will be only open to walkers. The harbour of Petra will be a cosy and busy place with plenty of cafés, terraces and tourists wanting to go to or coming from Turkey. And Kalloni? Nobody will go there anymore because of the persistant and awful traffic jams.