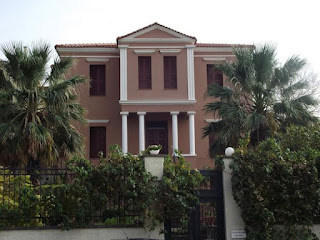 Last week a fire spat smoke over the capital Mytilini; the next day the smoldering fire was put out by rain. The refugee camp of Moria was partly burned down and even though in the north of the island we had no idea what was going on, the media did and soon picked up the news of the fire. European politicians however smelt nothing. They are still parading around proudly saying that their ‘Deal with the Sultan’ stopped the flood of refugees. I am afraid that they will only step into action and do what they promised when another photo of a dead child in a camp shows up and brings people all over the world to tears.

The whole situation makes my heart bleed and my frustrations escalate. Every tourist who visited the island this summer knows that life on the island (except around Moria) continues as usual. Tens of thousands of Greeks are still surviving a national crisis.

Cultural organizations however continue to organize festivals. This past summer the island was full of activities, not only for tourists, but also for the locals. The absolute top was the Molyvos International Music Festival, maybe the best classical music festival of Greece. Young international talents armed with Stradivarius violins and a Steinway piano played some lesser known and beautiful music in the fairytale like atmosphere of Molyvos Castle in several open-air concerts. I am still wondering how they got the Steinway into the massive fort. This kind of event attracts people who are drawn to the island itself, unlike the press-mosquitos drawn by the bad news

The Turkish couple Can and Sevda Elgiz also want to bring another public to Mytilini. They collect modern art and offer space to young artists in their Elgiz Museum in Istanbul, which houses the overflow of their growing home collection.

In the coming month part of this collection is going to be exhibited in Mytilini, and with a special reason: Can’s ancestors, the Kulassizades, were governors of Lesvos. Can’s great grandfather, Halim Bey, was the last Ottoman ruler, before Lesvos returned to Greek government in 1912. The entire family left their birthplace eleven years later to settle in Ayvalik, when the Treaty of Lausanne was signed and the population exchange was made. The family house in Mytilini, where Can’s mother grew up, was left empty, but some hundred years later still stands. The house now known as the Halim Bey Mansion has been restored and has become a public art gallery. This was for Can a good reason to reconnect with the island, and especially because Lesvos now needs positive energy.

After an impressive file of movie and pop stars, various artists and the pope, who all came to bring attention and help for the refugees and the Levorian population, we will now see some top-notch art. The Elgiz love to gather the work of the big names like Karel Appel, Robert Rauschenberg, Julian Schnabel, Andy Warhol and Gilbert & George. Which of their art works will cross the Aegean Sea is not yet clear. The exhibition called ‘Lines of passage’ is created by the Turkish curator Baṣak Senova, who has made her name in the international art world.

In earlier times it was not unusual to visit for several days a city that offered a high-profile exhibition. Nowadays masses of art lovers go to the big art attractions, although now you sometimes have to buy tickets months in advance and then still wonder whether you will see the artworks or just the queues of people waiting to get in.
A new trend is to mount exhibitions in lesser known places, and Lesvos offers a perfect opportunity to check this out. Art lovers: hurry to the Paris of the Aegean, Mytilini.

And for the artists (Like Marina Abramovic who last spring worked in Athens): Here is the island of the new art world! Ai Weiwei has already discovered it and because artists will not, like politicians, ignore the refugee crisis, more will follow to the island.