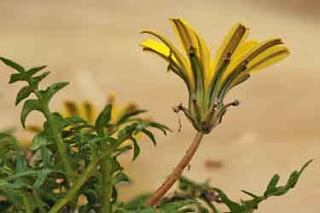 One of the things I noticed during the first winter I spent on Lesvos, was the groups of horta collectors. During the summer I had already been invited to go to the mountains in order to look for wild vegetables so I imagined a romantic outing on fresh mountain slopes with superb views. There also was a lady who kept inviting me to a farm in the mountains.

In that winter I found out that the area she referred to is known by the name Seven Hills (Eftalou), but I see this region as pretty flat and not at all mountainous: a sloping land with meadows and where olive trees grows. The farm was actually nearly at the sea and also it seems that the word farm for Greeks has another meaning than we have.

Here on the island nearly no Greek lives on his farm. The Greek farma which is normally only home-made ruins consisting of a collection of old wood and ancient beds set together as a shed which act as a shelter for sheep and goats. The farmers themselves mostly live in the nearest village and do their work from their village home. Agricultural farms are relatively unknown on the island.

So I wonder why you should go into the mountains to look for horta or go to a farma in the mountains: the seven-hill-area is one of the most popular horta regions of the north of Lesvos and as I have written many years ago in my blog: there are days that one group of horta hunters after another appear here in Eftalou, so busy that you could imagine starting a little fish & chips shop at the seaside.

You have very bold horta-hunters, who just roam into your garden or park their car or moped there, tear down the gate from the ‘closed for the season’ hotel (because there in this forbidden place, — the grass [in this case the horta] looks greener and juicer). The hunters behave as if finding horta is like a quest for the holy grail so everything is permitted. They have just one goal: to fill up as best and quickly as they can their plastic bags.

The knowledge of horta is mostly passed from mother to daughter; there are men who also know their greens but their skills lie more in hunting mushrooms. What horta hunters look for depends on what grows in that time, what speciality they have or on their state of health. One can look for horta that can mellow a headache, another looks for a horta that cleanses the blood or something against stomach pains. The fact is that horta is superbly healthy and lots of people do not even care or remember which horta is good for what ailment.

It is not that long ago that it was mostly only old women who went for horta. The horta knowledge was in danger of disappearing. However, nowadays more and more people have picked up the challenge of horta hunting and so I’m hoping that the knowledge of wild vegetables will be saved. Due to the crisis, going for horta is a new mania and why not? Suddenly people realise that nature is a kind of market where you get for free wild greens, seafood and snails. Along the coast you can go for squid, shellfish and sea-urchins, on the land you can gather vegetables. There is no supermarket that sells it that fresh!

When I recently was in Holland I was shocked to see that a big part of the Dutch go to the same supermarket, a super market that reigns a country! Pre-cut vegetables and fruit packed in plastic: who can believe that that is healthy? However tasty they make their products with chemicals, it has less and less to do with real food.

You do not have to live in Greece to go for horta. You will find plenty of edible greenery in your back garden, like burdock, cattails, chicory, dandelions, plantains or purslane. You may even cultivate wild greens as real vegetables: Weeds in your garden? Bite back! Or venture out on Sundays to the country and you will see, hunting horta can be fun.

Here on the island you do not really have to exert too much effort to get some food: the island is surrounded by a huge fish pond and so many wild vegetables grow that you do not have to look far, you’ll just stumble over them. Or the loudly buzzing horta-women will lead you to the best spots.

What is so great about the Greek climate is that, even in winter, nature is full of edible stuff. Besides horta and mushrooms, now the citrus fruit is to be harvested and it is time to brew sweet liquors, to pickle lemons and make and eat lots of orange and clementine puddings.

I wondered if there could also be horta-drinks. Herb drinks, like thyme liquor, are known, just like ouzo is made with plenty of medicinal herbs (that is why it is said that ouzo might cure stomach pains). I read somewhere that some Greeks drink the horta cooking water, seasoned with some lemon juice, as a medicinal drink. I have just remembered that as a child I made ‘wine’ with dandelions: I just soaked the yellow flowers in some water turning it a kind of yellow, which I seriously declared as ‘wine’. But dandelion wine does exist, even though I have not drunk it since my youth. Here is a recipe. And if you prefer to drink beer, you can also make dandelion beer.

Greece is a green winter-spring-wonderland full of culinary possibilities. It may take more time to collect than to buy ready-to-cook vegetables or fish filets in the supermarket, but at least you get something very healthy and fresh and… for no money!