A song of churches 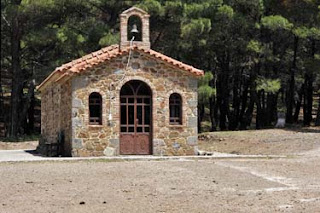 It is not that many years ago that the majority of the people living on Lesvos voted for the communist party. The island used to be known as a red island. Which is a little odd, because Lesvos is also known for its large number of churches and its inhabitants still live pretty traditionally: communism and religion here form a pair.

Long ago the island was already known for building lots of churches. Anthony Kaldellis wrote in Lesbos in Late Antiquity* that this abundance might be due to the fact that in pre Christian times Lesvos had bishops who followed doctrines other than those dictated by the main church in Constantinople and that for this reason they built churches for the followers of Constantinople as well as for those who were faithful to their bishop.

They were very pious in those times: Ioannis Moutzouris wrote in his book Ο Μοναχισμός της Λέσβου (the monkhood on Lesvos) that there used to be as many as 35 monasteries around Mytilini and 44 around Methymna (Molyvos). I wonder about those numbers; because I don’t know of a single monastery around Molyvos. There must be traces to be found. I’m sure that some of the older houses have been built with stones of those monasteries. And once you go digging in the earth, I do believe that entire monasteries and ancient settlements will appear. It is a matter of reading the old documents.

According to Moutzouris, it can very well be possible that the patron saint of Molyvos, saint Theoktisite, before she was abducted by pirates, lived in a monastery for women in Mnos. Molyviots eat part of their words and that is why it is possible that the name Mnos comes from the word life at the monastery (monachismos). Most people think that the region Mnos is also called Eftalou. But Mnos is actually just before the first high hill of Eftalou. In the past, during building work at the former taverna of Angelos, ancient walls were found in the ground, just on the spot where it was said there used to be a monastery. But there is no money for excavation and as we know there is so much to dig up in Greece. If you really want to dig up all of Greek history, the whole of Greece would be turned upside down. So the ancient walls in Mnos were recovered with earth and buried again with their secrets (the same happened during the building of the house of the yoga’s Victor van Kooten en Angela Farmer, a little further afield in Eftalou).

If there really were so many monasteries, how many churches would there have been? Not only Lesvos, but all of Greece is full of big churches and many more little churches or chapels. They appear everywhere, even in the most remote spots. The ‘in-the-middle-of-nowhere’ churches are called xoklisia and they can be very old indeed. According to a study about the landscape on Crete the age of those churches can be very valuable to the history of its region: those churches were not just built on any old spot, but served as a landmark for a road junction, a well or a spring or a settlement.

Lesvos also has lots of old basilicas from early Christian times, built by the church. Some were made of the stones from temples or were built right on the spot of old temples. Kaldellis has a second thought about why there were so many churches here on Lesvos. He suggests that when Christianity was introduced on the island (pretty late, around the fifth century), the merchants who were familiar with the outside world and who introduced Christianity made sure that many churches were built in an effort of modernization. The inhabitants were not forced to convert but old pagan believes slowly made way for Christian rites. So no iconoclasm but a transition from temples to churches, with people combining usage of old pagan rites and the belief in one God. Kaldellis also refers us to the sacrifice of the bull, a tradition that existed until not long ago in Agia Paraskevi, where bulls were offered and even nowadays symbolically celebrated each year – a pagan tradition that has never disappeared.

But most xoklisia were (and still are) not built by the church but by citizens as a tama. Tama is the promise that you make to God when you want something from Him: getting cured from an illness or to acquire something very special. On Chios for example, the island of shipping magnates, it is the norm that for every second ship you buy, you build a little church to show your gratitude.

You will not find shipping owners on Lesvos, but lots of sheep. It might be that for every hundredfold of sheep you build a church? Fact is that even though it is a time of crisis new churches are still being built. But I am sure that once the crisis is over, an even bigger new craze of building churches will appear!

*From the book: Archaeology and History in Roman, Medieval and Post-Medieval Greece: Studies; chapter 10 by Anthony Kaldellis: Lesvos in late Antiquity: Live Evidence and new Models for religious Change.