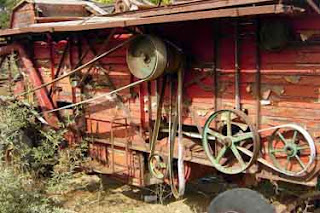 It is not easy to quit smoking. Especially when living in a country where the authorities have tried in vain to make public buildings and restaurants smoke free and where the people are reputed to be the biggest smokers of Europe.

I suppose this is understandable as tobacco is actually grown in Greece. Even on Lesvos there were once tobacco fields, particularly around Kalloni. Nowadays it’s only the olive groves and the sheep and goat meadows forming the agrarian landscape, whilst in earlier times the fields were more varied. Along with tobacco, pulses, cotton and wheat were grown in large scale, amongst the export products were wine, figs and acorns (for the leather industry). And, to be honest, until the beginning of the twentieth century many more people lived on the island.

It is said that the Italian family Gattilusio, who reigned the island from 1354 to 1462 stimulated the export of wine and olive oil. Presumably before the inhabitants of the island grew those products only for their own usage. When the Turks took over the island the commerce continued to grow on the island and by 1548 taxes had to be paid on wheat, barley, beans, chickpeas and field-beans, sesame, flax and cotton, must and wine, figs, mulberries and almonds, olives, olive oil, honey, pigs and silk.

At the end of the seventeenth century tobacco appeared in the Lesvorian fields, that’s about one century after Christopher Columbus brought the tobacco plant back from South America. It was the Indians in that faraway part of the world who had discovered that smoke from the tobacco plant had pleasant effects and they started to use it for their rituals. The Spanish used it as a cure for sleeping and in 1560 a doctor who travelled through Portugal sent Catharine de Medici some tobacco leaves as a cure for her headaches.

Tobacco first was a medicine, but as soon as they learned how to roll cigars with the leaves, tobacco became a stimulant. However, it was cigarettes that made half of the world addicted to tobacco. The very first cigarettes were rolled (and smoked) by soldiers in the Crimean War (1853 – 1856). Later, in America, a machine that rolled 200 cigarettes a minute was invented and so it started: American soldiers got ammunition and cigarettes to fight in the two World Wars and it was they who introduced cigarettes all over the world.

And so the Greeks started smoking too. And not a little bit! In old Greeks movies you rarely see a hero or heroin without a cigarette in their hand or mouth. Just watch Melina Mercouri in Never on Sunday, and you really want to start smoking again.

There were tobacco fields aplenty in Greece, producing different kinds of tobacco. But strangely enough, when the cigarettes became so popular in the Fifties the tobacco fields on Lesvos had became more or less empty. People had had enough of the island: there was a crisis, people no longer wanted to work the fields for no money and emigration became a must for many.

In 1913 there were 140.000 inhabitants counted on the island: then the economy was at its zenith thanks to commerce with the East. In 1912 the island was freed from the Turkish, but Mytilini continued to be a lively centre of international commerce. It was only in 1922 when Greece lost the war with Turkey and the Orient closed down to Greek commerce that Lesvos suddenly was in crisis. It must have been chaos then because people left the island in large numbers, but refugees filled the empty places up. In 1940, 135.000 people still lived on the island. Trust in any recovery of industry however was then lost and the number of inhabitants lowered rapidly until in 1981 they numbered only 88.000. In this century the estimated number has been around 90.000, although last year another exodus started due to the new crisis.

So, even before the world finally decided that cigarettes were bad, the tobacco fields of Lesvos had already been abandoned, along with the many other products that disappeared from the export list. The island now mainly lives from the byproducts of sheep, goats and olive trees. There is a small export of ouzo and the only new thing is tourism, which is good for a small part of the income of Lesvos.

I would like to have a small field with some tobacco plants. I guess that cigarettes made from homegrown tobacco cannot be that dangerous to the health. But in Greece there is this old and strange law that you are not allowed to smoke your homegrown tobacco. So should I really quit smoking? Sigh.