I want my island back 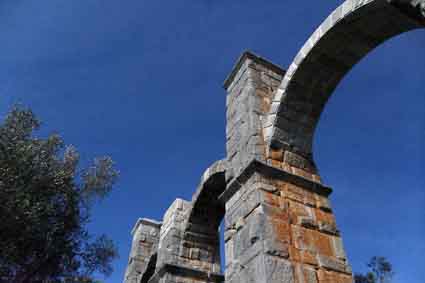 (the aqueduct of Moria)

Last week on Facebook somebody cried that he wanted back his beach. Beaches that in the summer are shadowed by trees and are popular with Greek families are now scattered with shipwrecks: no longer a perfect playground for children. And now it was suggested that volunteers could also clean up the beaches.

I know more people who want something back: houses, family, lives. I myself would have back the island as it was some years ago, in the pre-European period: when restaurants were still full of happy Greeks who sang about life and danced around the tables, a period that was not in the shadow of history that now races at high speed over the world. We will have to accept that there is no way back, unless a working time machine can be constructed.

Lesvos is a very old island and if I had to choose in which time I could visit the island, I would have to take some time to choose, because there were so many fascinating periods.

According to recent archaeological finds close to Lisvori, 2.6 million years ago people here were already trying to get their lives together. The island was still part of the opposite mainland and lots of monsters still creeped around: mastodons, mammoths and giant turtles. I would not like to meet those for real.

During the siege of Troy (1184 BC) Lesvos would have been a good place to watch all those heroes pass by. Next came a time of different Hellenic dominations, centuries in which the island became a rich naval power, and conquered a big part of the opposite coast. I would have loved to see the busy sea traffic between Lesvos and the then so-called Coast of the Mytilinians. Maybe Eftalou was then a lively village with a fish market.

Then came the Persians, who had an empire as big as the whole Middle East area that is now in conflict. But even that empire was not eternal and was overthrown by the Arabs and the Greeks. Some of the states of Lesvos became divided and declared war on each other, for example Molyvos and Mytilini. Perhaps this would not have been a nice period to visit, although the book about Daphne and Chloë portraits it as a romantic period.

The Romans put an end to the fighting Greeks and promoted the island as a paradise for holiday makers, although they also sent exiled people here. Strange fellows, those Romans, but I would have loved to see them whirling around over my beloved island. I picture them lying with their fat bellies, around tables full of Lesvorian food, tasting flamingo tongues, followed by some Roman delicacy. After which they would venture out on an excursion to Agiasos in order to eat wild boar. But they did find time to build aqueducts, like the one in Moria that survived the centuries.

That big empire also crashed and the glorious Byzantium arose, but its brocade bestowed leaders did not care about Lesvos and so many power-mad men tried to conquer the island, like the Genoese Gattilusi family, who held the island for one century. That also does not seem a nice time to see the island, because all the coastal villages were very much afraid of the famous pirates who raided the coasts and kept alive the slave trade. It was in these times that the castles of Molyvos and Mytilini were rebuilt as fortresses.

The Ottomans ended both Byzantium and the power of the Gattilusi. But even though the island was occupied for centuries, Lesvos again prospered. In her last Ottoman century Mytilini became a lively merchantile city, definitely worth a visit. It is said that the most beautiful women of the Levant gallivanted through its streets in the midst of a crowd of international merchants. Lots of countries had an embassy on Lesvos and its goods were sent as far as the Black Sea. It was the last Golden Century for Lesvos, because by the time the island could again call itself Greek (1912), luck and money had again left the island and its population could hardly survive. After World War II many people fled to faraway countries like Australia, Argentina and South Africa.

Only when Greece finally came into the hands of Europa, the people began to forget their nightmares of hunger and the shops filled up again. The big empire of Europe was not as cruel as its predecessors, but the new imposed tax system is reminiscent of the Ottoman Pashas who for centuries ripped-off the Greek people.

Now it looks like the Persians have returned. Thousands of refugees from southeastern countries invade the island. This army, the victims of international power games, however is welcomed as humanely as possible. But it is the forewarning of a new direction in history, not only for Lesvos, but especially for fading Europa that neglected Greece and now is on the brink of falling apart.