Do not forget the island 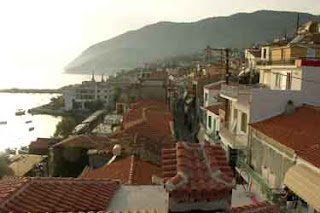 Wild waves of froth roll towards the island, while the mountains in Turkey, hidden by the shadow of a sun that does not shine, bare their teeth while laughing. The leaden grey water hides many tragedies, but hasn’t lost its majestic look. Nor has Lesvos, that over the past year has had the eyes of the world upon it.

Dramatic scenes and the sorrows of so many people have created a veil of tears as deep as the mountain of lifejackets is high; but the green mountains of Lesvos tower higher over this all. History is like a rough sea, with waves that rise and fall. The island has plenty of stories to tell, about people acting badly or as heroes.

Roads and paths cut through a rampant wilderness, hiding many woes long forgotten by the islanders. As a visitor you can ask each stone what it has seen during its century long life. But nature is a master in covering up under its green carpet all that once was, just as the sea keeps on pulsing her water until all the tears and fear have been lost in the dancing of the waves.

The island of the beautiful weaver of words, Sappho, is not in a hurry to reach into the future, nor does it weep for its many deaths at sea. Formed long ago by fire-spitting landmasses, Lesvos challenges its visitors and makes them seem small. It radiates a kind of eternal life and is stubborn about its traditions, only moving slowly towards modern times.

Faraway wars have pushed refugees towards Lesvos and now its north and east coasts are known worldwide, whilst the other regions of the island stubbornly continue their daily life. Men rake the olives out of their trees, jog along behind their sheep or sit in the cafenions looking in the papers for news that happened only next door. Women peel, cut and cook and in their simple kitchens conjure up amazingly divine dishes.

Between the many villages of the island, the treetops bow respectfully to the Gods of the wind, at the same time gossiping about all the mushrooms and wild strawberries that were forgotten to be collected, or about the bold anemones and sweet scented narcissi that have decided to see the light before Christmas: a sign that playful Spring wants to have her entrance arm-in-arm with Father Winter.

Sweet waters from so many sources search new ways to waterfalls, tender green meadows and jerrycans. Holy churches have been named to watch over them, but are also there for other purposes, like honouring miracle creating saints. Faith is as deep as the Lesvorian bubbling core, where the sources begin.

In the South and West many isolated beaches run along the sea, unknown to many tourists, who think that the best holidays can only be taken in the North. Like a medieval Queen, Molyvos towers high above the coasts that are battered by shipwrecked people. While small Sigri, at whose tide lines only real sailors appear, radiates white and innocent like a sweet princess. There, like a gold prospector, the wild wind uncovers in the earth sleeping treasures that only have to be kissed by geologists to show their by centuries’ formed beauty.

Steep peeks of sleeping volcanoes form the majestic entrance to Eressos and where Skala Eressou meets the sea, lips of women touch each other. It was here that Sappho rose from the earth like the goddess Venus from the sea and she still is worshipped in the many bars where evenings, full of colourful cocktails, have hearts and tongues dancing.

There where bent pines kiss the foam from the sea, stretches the sandpit of Vatera. So long that it is hard to believe that tourists do overlook this great beach. Large sand plains dappled with stones polished by the sea offer a surprising loneliness with the airy Graffiti Museum as an added bonus.

High in the mountains a small source gathers strength and curls down like an impatient river through tunnels of trees, bushes and dilapidated watermills towards the sea, cutting in half a princely little town. Plomari, growing against steep slopes, consists of rising and descending stairs and streets. There faded glory lives next to the lively terraces at the harbour, looking out over a south sea that only once in a while embraces a refugee.

The lungs of the island – the Bays of Yera and Kalloni – have kilometres’ long coast lines, not polluted by rubber boats or lifejackets. They manage saltpans full of pink flamingoes, chatting pelicans and other swimming birds. There where the salt and sweet water merge (and further) you can find amazing deserted aquamarine bays and by trees shadowed beaches.

In the north of this Pearl of the Aegean, Molyvos and Sikaminia, fire-spitting dragons, watch over the safety of stranded strangers. The largest part of the island however stretches endlessly and undisturbed towards the south and east, where history still sleeps and where the appearance of a refugee or a tourist still causes talk in smokey cafenions. Lesvos is far more than an island sheltering refugees. Do not forget that island.

I wish everybody a peaceful, better, helpful, compassionate, healthy and happy New Year.