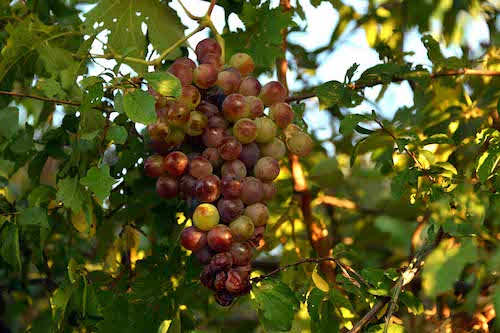 According to scientists viniculture started in the Middle East around eight to nine thousands years ago. A Greek myth tells that the god Dionysus had his beloved friend Ampelus changed into the first vine, after this young man having insulted the moon goddess Selene was trampled to death by a furious bull. Since then grapes have been well established in our world. At the end of the nineteenth century however the blight phylloxera ended the life of most vines in Europe including on Lesvos. However the grape is back in our landscape.

Until the disease struck, Lesvos has been famous for its wine. Since ancient times Mytilinean wine (the island used to be named after its capital Mytilini) was highly praised around Europe; Homer said that other wines could not compare to those of Lesvos. One of the brothers of Sappho seemed to have been a wine trader, doing business, amongst other places, in Egypt. The Romans also loved Mytilinean wine, as did the ladies and eunuchs in the Ottoman harems.

Don’t think that we are missing something by no longer having the famous wine from ancient times: it was mostly sweet, you drank it straight for breakfast, with some bread; later on the day it was diluted with water or sea water, rasped cheese or flour. They even used other fruit, like figs, pomegranates, apples or quince to make it into wine.

It is said that the famous, heavy, dry Pramnian wine, now known as an official local wine from Ikaria, was first made on Lesvos. The grapes were harvested late and stacked in a container. With time and gravity — a thick nectar seeped out from underneath.

In the fourth century BC the ritual of wine making on Lesvos was a bit more complicated: after September 14 families started picking the grapes while singing and gossiping. Under a blazing sun and when the heat became too much, they all dived into the sea, naked, men and women separated. First the grapes were spread out under the sun to dry, then the must was pressed out of the grapes by the feet from tiny boys and poured into small containers where the must could ferment.

Wine from Methymna (Molyvos) was compared to the nectar of the Olympian Gods. One day the fishermen of this little town found a wooden head in their nets. A local priest thought it to be the head of Dionysus, causing the locals to start worshipping Dionysus. They also minted coins on which grapes and the god of wine were depicted. There must have been many a merry drink in Methymna: Dionysos also being the God of the parties.

One day Dionysus was kidnapped by pirates, thinking him to be a rich prince. They tied him with ropes, but the ropes would not remain in place. One of the rowers said to the captain that he could be a god and they better get rid of him. But the captain didn’t believe that. Then out of nowhere vines appeared and climbed into the masts and waves made of wine crashed over the deck. Dionysus changed into a roaring lion. Other wild animals appeared, driving captain and crew into a corner. As Dionysos threw himself on the captain, the crew all jumped into the sea where they changed into dolphins (except for the one rower who had befriended Dionysus and who remained alive).

When autumn is about to begin on Lesvos I am reminded of that story. For now you might see trees full of bunches of grapes, just as if Dionysus had conjured the grape into doing whatever they love to do, just as they had on the pirate boat. Vines proliferate freely and merrily, climbing high into trees to get a better view as well as embracing fences to provide better hold for their heavy bunches of grapes. It is clear that Dionysus has never left Lesvos.

Lesvos has not become a party island, like some other Greek islands. Along with the well known ouzo production, wine making is back on Lesvos: Methymnaeos in Chidera (red, white and orange), Makara in Mytilini (Makara, Daphnis & Chloe) and Weingut Axel Schmitt in Eressos (Eressoinos). The wines of Lesvos no longer have a place with the top Greek wines, but they are good enough for the Gods to accompany their festive dinners.