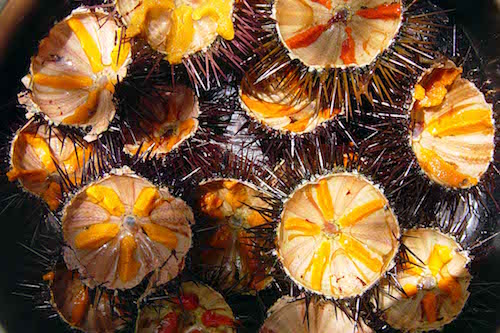 The first time I was invited for an ouzo by Greek friends, it was late at night and being a Dutch I thought it would only be some ouzo accompanied by maybe a little bit of cheese. So I’d already had dinner at home and I didn’t believe my eyes when one dish of food after another was piled onto the table! The little plate with some cheese, fish and bread that you get served with your ouzo in a taverna, clearly had nothing to do with a dinner in a Greek home.

‘Drinking an ouzo’ is the Greek way of having dinner. The dishes at the home tables in Greece don’t differ too much from those in restaurants. In the restaurants you generally also get food from ‘Mummy’s kitchen’. If you’re lucky, and especially around feast days, restaurants have a lot more than what’s on their daily menu. A good piece of advice: ask what they have that day instead of studying the menu. You will get some nice surprises.

One of my favourite dishes for a feast day is the stuffed lamb (arnaki yemista). The lamb is stuffed with rice, small pieces of offal, raisins, pine nuts, cinnamon and other spices. The lamb must be prepared in a large oven and if you don’t own a big one, local bakeries, like at Easter, open their oven for the public. However a lamb is best prepared in an outdoor wood stove. The day before the dinner you build a fire in the oven, let the oven heat for some hours, then take out the glowing coals and insert the dish with the lamb, which has been anointed with oil and lemon, in a little bit of water. The next evening the lamb will be wonderful and tender, the stuffing perfect.

Another dish that is stuffed and sometimes available in restaurants (amongst others the second restaurant in Petri), is stuffed squid (kalamaria yemista). The rice gets a lovely sweet aroma from the kalamaria and the different spices such as orange peel.

Sea urchins (achinoes) are thought to be the best dish to accompany ouzo. You will rarely find them on a menu (the fish restaurant in Achladeri may have them from time to time). With a little luck a fisherman will offer you some on the beach, but best is when you collect them yourself. You can get a stick with a grabber, so you can safely pick them up. Then you need a kind of cutter in order to cut, like an egg, the sea-urchin. You clean them from the blubbery insides and you are left with the bright orange eggs, that have a wonderous salty taste that goes very well with the spicy taste of ouzo. Just as they douse everything with lemon, Greeks also like to put some lemon on sea urchins. I don’t. I prefer it straight.

Shellfish (thalassina) are one of the specialities from the Gulf of Kalloni: venus shells (kidonia), mussels (midia), wild oysters (stridi), small St. Jacques shells (chtenia). Mainly all these gorgeous shells appear on the table in the winter in the restaurants around the Gulf of Kalloni and sometimes also in restaurants elsewhere. Greeks prefer to eat all shellfish raw, just like oysters. Also mussels. I don’t like raw oysters so I always quietly ask the cook if he or she will cook them. No problem at all. At home I cook them like I cook Dutch mussels: with some spices and some wine, also I never eat the shells that remain closed after cooking.

When a farmer slaughters an animal he keeps the best parts for himself. That’s why a beloved dish to accompany ouzo is rarely on the menu: lambs’ testicles (ameletita) and sweetbread (glikadia) (sometimes you get it at restaurant Ellis in Anaxos). I get hungry just writing about this. They are prepared in lots of oil and they have a wonderful sweet and wild taste. Even better than the testicles themselves is the cooking juice. You can enjoy your ouzo for hours dipping you bread in this dish.

Liver (sikoti) is a dish that you see regularly on the menus. Greek people like to eat their meat well done, but liver is often served medium rare.

For the people that are shivering now because of all that I like to eat here on Lesvos, now comes a speciality that even I have problems eating: the head of a sheep (kefali provaton). Well, you do not eat it all, but the entire head is served on a plate, the skull a little opened so that you can easily spoon out the brains. The cheeks, eyes and the tongue are seen here as a delicacy. I am sure when you have had enough ouzo, you will see that it won’t be a problem to enjoy this dish as much as your host.

Then I also want to mention the Patza. This is a fatty soup made of offal and it is the best cure for a hangover. Greeks eat the soup to prevent a hangover. In the big cities like Athens there are even special Patza restaurants, open all night and with huge crowds. Here in Molyvos sometimes you get the soup served at the home of Greek friends. After an abundant meal followed by masses of sweets, when I really cannot eat any more and the bottles are empty, there comes the big kettle with patza on the table! That is the moment when even I with enough ouzo in my stomach, cannot bring another spoon to my mouth, even if it was chocolate soup. The Greeks however all eat. Maybe you think now that the Greeks are heavy drinkers, but you don’t often meet a Greek with a hangover…