Emails for Mary and churches on Lesvos 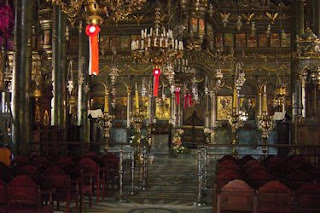 The Assumption of Mary, on the 15th of August is the biggest Greek festival after Easter: party day for the Greeks. They do at least more than just eat. They go to church and some of them sit out a service that can take hours. Pilgrimages are also popular that day. Just like the majority of Greeks go to a Mary Church to honour the Virgin Mary.

One of the most important Mary churches in Greece is the Panagia Evangelistria on the island of Tinos. Last week thousands of people flocked there to kiss the famous icon of Mary Megalomatia (Mary with the big eyes). Time has moved on this island: for the faithful who couldn’t attend, there was an e-mail address and so the church received hundreds of e-mails for Mary, from people in Greece and abroad.

Also on Lesvos it was very busy at the popular places for the Mary festival. Last week thousands of people climbed the 114 steps that lead to the Glikofiloussa Church (Mary with the sweet kiss) on the huge monolith rock in Petra. It took some old women hours, but they were determined to do it. And believe me, such a climb in this heat crowns a pilgrimage.

Already, weeks before the 15th of August, pilgrims were welcomed in the Panagia church in Agiasos. The journey to Agiasos is seen as a pilgrimage: lots of people come on foot from Mytilini and some of the faithful do the last part, the path winding up into the village, on their knees. The church was built as a home for the centuries old icon of Mary Vrefokratoussa (Mary bearing the Holy child). This icon was brought to Agiassos at the end of the 8th century by Agathon the Efesus, a priest from Constantinople.

Agathon was banished to Jerusalem, but he wanted to visit the Byzantine empress Irene who had a famous collection of icons and lived on Lesvos because she was also banished. When Agathon arrived on Lesvos however Irene had just died and Agathon had to look for a safe place. He went into the mountainous area around mount Olympus and when he felt safe he revealed the treasure he was hiding: an icon of Mary painted by the apostle Luke. In the icon was written: “Mitir Theoe, Agia Son“, which means mother of God, Holy Sion (Jerusalem was also called as Holy Sion at that time). So this is how this mountain village got its name.

The first church was built in 1170 upon the bones of Agathon. Soon some houses appeared and it became a hamlet that offered a safe heaven to Greeks fleeing the Turks when they conquered the island. In 1701 a sick Pasha was healed by the holy water of Agiassos and for this he ensured that the people from Agiasos were exempted from paying taxes to the Ottoman Sultan. This tax free paradise attracted a lot more people and so Agiasos became a prosperous town. By 1729 some 500 families were living in Agiasos.

In 1812 the church, together with part of the town went up in flames (yes, at that time as well there were disastrous fires). The sultan granted the rebuilding and when the money was raised they started the building of a wonderful new church. However, this church was soon destroyed by another big fire in 1877, which burned down the whole village. Both were rebuilt.

Present day Agiassos is also known for its wood carving and ceramics. When you enter the village, you are immediately confronted with shops that are filled from floor to ceiling with icons and ceramics. By the time you reach the church you will have seen all the saints of the island, as well as hundreds of different Marias and plates and vases in all shapes and colours.

And believe me, Lesvos does have a lot of saints. There are so many churches and little chapels and they all have their own story and are each dedicated to a saint. People still continue to thank a saint by building him or her a new church.

But they are never built as beautifully as they were in earlier times. Yellowed printed icons, or pictures behind glass in a kitschy frame replaced the valuable icons and wall paintings that were the decorations of the earlier times. Lots of those murals did survive. But only a few churches have the money to conserve these treasures in the proper way. One of my favourite paintings is the fresco in the church of the former monastery of Perivoli (on the way from Vatoussa to Andissa). This piece should be in a museum. It is from the 16th century and depicts a Heironymos Bosch like scene with sea monsters eating people. This colourful wall paining is not even protected by glass!

So I totally agree with the World Monuments Watch which on its 2008 list of the 100 most endangered sites of the world put Lesvos with its historic churches. 12 churches are on their list as a whole, from early Christian to 19th century. They do not name them but I am sure that the church of Perivoli is one of them.

The World Monuments Fund will save these sites from destruction, which can be caused by climate changes, wars and other threats, but also by bad restoration, as seem to be the case on Lesvos. Here they don’t really know how to conserve. Imagine: around the 15th of August such a centuries old icon of Maria will be touched or kissed by thousands of believers. Wall paintings such as the one in Perivoli are not well protected against the weather, mosaic floors will be eaten away and some precious old icons stand unattended between kitschy modern icons.

In the big monasteries like the Lemonos Monastery close to Kalloni or the Taxiarchis Monastery at Mandamados they take care of their treasures. But who takes care of the treasures in the smaller and less popular churches? The mural paintings for example in Liota have nearly all disappeared… The rich but conservative Greek Orthodox Church should be ashamed that an international organization has to take care about their treasures…