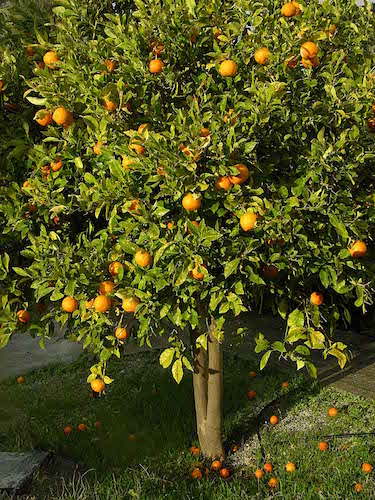 Atalanta was the beautiful daughter of a king. An oracle told her that marriage would bring her bad luck. But her father really wanted her to be married, so he proposed his daughter to marry the man that could beat her in a foot race. Atalanta was more than a very good runner and thought that nobody could beat her. A lot of young men tried, but all lost. When Hippomenes saw Atalanta he immediately fell in love with her. That is why he asked Aphrodite to help him win the race. Aphrodite gave him three golden apples that he had to drop on the race track. Atalanta could not resist the golden apples and stopped three times in order to pick them up and so it happened that Hippomenes won his wife.

This is one of the many Greek myths and they nearly never end with “and they still live long and happy…”. There are two versions about how the marriage of Atalanta and Hippomenes ended. It is said that the two lovers forgot to thank Aphrodite and that is why an angry Aphrodite turned them into two lions, so that they could not make love anymore to each other. Or it was Zeus who punished them by turning them in lions, because they made love in one of his temples.

Golden apples are mentioned in different myths. Scientists think that those apples were not made of gold, but that they were quinces.

I do not think it were oranges. This fruit came from Southeast Asia and was properly introduced in the western world around the 15th century by the explorers, amongst them Christopher Colombus. That is why the Dutch and German call the orange an ‘apple from China’ (sinaasappel and Apfelzine), while others gave them the name of the country from where the explorers were: Portugal. In Greek a sweet orange is a portokali and in Turkish portakal. In other countries the fruit is just called after its colour: orange or naranja (Spanish).

Lesvos grows some oranges and you will find most of the orange trees between Thermi and the capital Mytilini. The best walk to enjoy these orange orchards is the walk from the walking book from Brian and Eileen Anderson (Lesvos, car tours and walks, ed. Sunflower): walk number 3: round walk Thermi over Panagia.

I mentioned it before that the Andersons think that they should outrun as well Atalanta, according to them the walk takes 1 hour and 20 minutes. You can make the walk that quickly, if only you were not distracted by those same golden apples that held up Atalanta. Not only are the orchards with its orange fruit a breathtaking sight, you pass as well little churches where you really have to stop: the Saint Nicolas church with its enchanting walled garden where you can taste secretly from a first orange, with its walls built out of very old stones and there is the Agia Panagia church of Panagia, whose fore front dates from 803 and that has beautiful wood carved icons.

The walk over walled paths leads also along some old tower houses, traditional Lesvorian houses that were build in the 18th century, by farmers who did not want to give up their land to the pirates, who raided the fertile coast grounds more than once. The farmers built high stone houses with the first floor often of wood and a little larger than the floor below, with thick wooden entrance doors and grated windows. Later people from Mytilini used those houses as country houses. One of the better renovated tower houses is just besides the Agia Panagia church and from there you have a stunning view of the seaside region of Thermi.

At the other side of the island at Parakila, along the Bay of Kalloni, are more orange groves. Walk nr. 18 from Round Walks on Lesvos (Sigrid van der Zee & Mike Maunders) take you along an old minaret, along the shore, to the orange groves. Here is no hurry, you just have to enjoy the scent of the oranges. How sweet can winter be!