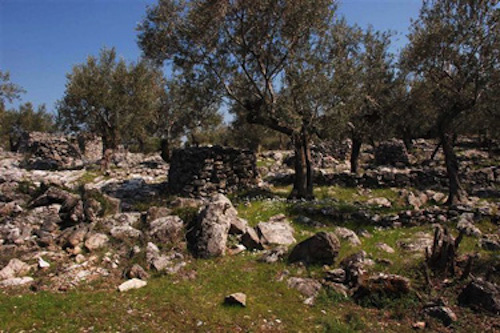 One of the less known municipalities of the island is Evergetoula, named after the river that flows down from the Olympos and ends in the Gulf of Gera. Everybody going north passes this municipality, because the small village of Lambou Mili that is divided into two parts by the national ‘highway’ Mytilini – Kalloni, is part of this municipality. The other villages are: Asomatos, Ippeios, Kato Tritos, Michoe en Sikoundas.

You can find Asomatos, the smallest village of the municipality, besides the most beautiful mountain village of Lesvos, Agiasos. In the summer Agiasos is filled with lots of tourists, however Asomatos does not look as if modern times reached it: there are no souvenir shops and the village is always quiet, many people still travel by donkey and the cafenions can all be put on the list of monuments. It is the most beautiful village of Evergetoula.

It is difficult to say exactly which spot of Evergetoula is the most beautiful. The walks that are described in this area (like by the famous Andersons in their walking book Lesvos, car drives and walks) bring you over centuries old monopatia (small donkey roads) and are of an astonishing beauty. Everywhere water finds its way down from the mountains, the forest parts sometimes are like a real jungle and the olive groves with their small round little walls against erosion of the soil, seem to have kept their century old peace.

Except for some walking guides no tourist guide mentions the area. Even the thick guide about Lesvos Anexerefniti Lesvos (The unknown Lesvos), with the amazing pictures of Tzeli Chatzidimitriou only brings you by car to Asomatos, the watermill of Milellia and to the aquaduct of Lambou Mili.

The old watermill of Milellia was restored in 1994 and now produces flour in a way they did in the old times. With the flour tasteful pasta’s and bread are made and are for sale in the arty shop that belongs to the mill. On the same property you will find as well an olive press, one which used to be driven by donkeys in the earlier times.

But Evergetoula has some other very nice spots that are worth visiting. First of all there is the lovely park of Anargiri. With its high trees, the small chapel that was built in 1881 and the water that always flows, this is a real cool oasis full of shadows in the heart of the island. From this paradise it is a must to take the little path that follows the river in order to taste all the greenery, and to listen to the bees that give a loud concert, and to sniff the smell that emanates from the plants and the soil and are like a jungle perfume with the running water and frogs plunging in when you come along.

Between Anargiri and the Gulf of Gera there is a mountain ridge with the tableland of Pláti. The soil rich of lime is shattered with stones and in the spring as well it is shattered with orchids. When we went there last week on a flower hunt we could not choose between looking down at the colorful orchids or looking over the grey-green olive groves where in between the trees it was full of little towers made of stones. We thought we were at a sacred spot where the towers filled up with stones had a mysterious meaning. Of course no sign with information was to be found. Are these towers just the result of farmers picking up the stones from their land so that they can more easily plough it or do the towers of Pláti have a story?

There are very few people who can tell you about your findings like the old graves in Palios, the old churches or these towers. On the internet where you will find just a little information when you look hard and long. In whatever way I typed the name of Michou in the search machine, no towers of Pláti came up, they only were signed on one tourist map of Lesvos.

The village of Michou is reasonable well described on the website of the municipality of Evergetoula. I was surprised to find as well the description of a cave that you should pass walking walk number 14 of the Andersons: Michou and Pláti: it is there I remember to have seen a sign saying ‘Cave’. However I never found the cave, nor have I been inside. It is the cavern of Foussa and when we have to believe the website of the municipality of Evergetoula, it is the most beautiful one of Lesvos. The cave was discovered in 1981 and following some low corridors you get access to chambers of 20 meters high…

There are many books about the plants on the Aegean islands. There are some walking guides for Lesvos, there is a famous book about the birds on Lesvos (Richard Brooks – Birding on Lesvos) and I even found a (Greek) cooking book with recipes from Lesvos. But why is there no good guide (in English) where all archeological treasures are mentioned, like old Andissa, or all byzantine churches like that in Ypsilometopo (the palioxristian church is from 323 AD in valley) or the graves at Palios? Why nobody ever traced all the old watermills, why can’t I find anything about the towers of Michou, why is the old Roman aqueduct of Lambou Mili no tourist attraction? It really is time that archeologists and historians get together and do something about this forgotten island…