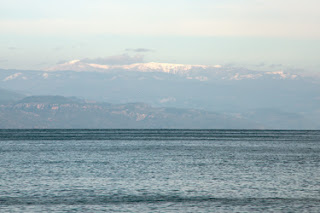 (The Mount Ida seen from Lesvos)

Today in Chalkidiki (north of Greece) a group of around forty masked men entered the compound of a goldmine and caused a lot of damage. This aggressive act was to be expected: for some time the inhabitants of this region have been protesting against the opening of this particular goldmine, called Kouries. The licence to dig was given to Hellas Gold, 95% owned by the Canadian mining company Eldorado Gold, the remaining 5% owned by the Greek company Aktor.

Activists claim that politicians have put the country up for sale and that’s why controversial mining projects like this can happen. Eldorado Gold mainly operates abroad, in third world countries where, on the whole, governments don’t care about the environment and the population welcomes low paid new jobs. So yes, I guess this means that Greece, this southern part of Europe, has become a third world country.

Gold mining not only destroys large spaces of land where all trees have to be chopped down, but mercury and cyanide are used to separate the gold from other metals and other heavy metals can come free during this process. When these materials seep into the ground water or are released into the air, there can be contamination of natural resources as well as risks for people. Most of these mines are only operational for a certain number of years, thereafter they are abandoned, leaving the local populace with a polluted and destroyed environment.

It could be that Lesvos might get sold out to just such a large company. But for now, the island can count itself lucky that its western part is threatened ‘only’ by a huge Spanish wind mill park that will destroy part of its nature but will not use poisonous matters like mercury or cyanide.

The Golden Danger however comes from Turkey, the leading European country for gold mining and most Turkish gold mines are in the west, not too far from Lesvos, like the Pergama-Ovacik Goldmine. Okay, that’s a bit away, but the danger might also come from closer to home: last year the inhabitants of the small village Zeytinli protested against coming gold mines that are proposing to get the gold out of Mount Kaz.

I look out on this huge mountain in Turkey. It is also called Mount Ida. Most of the time in the winter it’s covered with a bright white layer of snow. It’s said that in ancient times the Olympic Gods used the top as a watchtower to follow the Trojan war. The slopes of this mountain descend all the way to the Golf of Edremit, which is opposite Lesvos. The area is also called the Olive Riviera. Just like Lesvos, most living is made from the olive trees and they are not happy about the arrival of a polluting gold mine industry.

It has been raining a lot on the island and everywhere rivers and small rivulets are looking for a way to find the sea. But not all the water descends from the mountains. In flat areas you’ll see water rising up: these days the island has hundreds of wells that only work when the heavens have thrown lots and lots of water down, as in this past winter. In many places now you will need rubber boots to keep dry.

Water can be pushed up from an underground water basin; the more water there is in this basin, the more water is pushed up. It is said that the wells of Lesvos are connected with the wells on Mount Ida as they share the same underground basins (I see it as communicating vessels). So here you can see the danger: when the groundwater in Turkey gets polluted through gold mining, the water on Lesvos will  also get contaminated. And even if this communicating-vessel theory is wrong, there remains the danger that the sea between Turkey and Lesvos will get polluted by materials that are used to make the gold shiny.

In ancient times on Lesvos there was mining; in the region of Molyvos silver, zinc and lead were extracted. In Byzantine times there was even gold mining too. If Mount Ida is full of gold, I wonder if there isn’t gold in our Lesviot hills as well.

I don’t want to start a new gold rush, but a few days ago a friend came with a strange story. He found two small nuggets in his wood stove. The question is how this gold came into the stove: is there gold coming up with the water, getting entangled in the roots of the olive trees, that later find their way to his wood stove, or did somebody loose a heavy golden chain or bracelet that then got entangled in the wood and later melted in the wood stove? It’s a fascinating story, also because I have heard the same story about another person who years ago also found a nugget in his wood stove.

So maybe we don’t in fact need those goldmine polluters to find the gold. We just need to let the trees do the job of getting the gold up from the earth. And then we need to start sifting through all the ashes coming from the stove. So for all you fortune hunters: gold not only comes from the mines, but also from the wood stove!