The most beautiful flower of spring 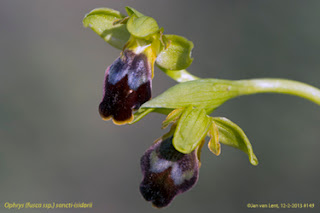 It has taken some time, but finally the almond trees have come into blossom, at bit later than other years. The result is that the Lesvorian landscape is coloured with tufts of pink-white clouds and I’m amazed to see how many almond trees grow on the island. It’s the best time to count them because these fruit trees are always the first ones to deck their branches with these fragile blossoms. And now the first prune trees are slowly starting to open their flowers with the peach and apricot trees soon to follow.

In the local women’s cooperatives, they make marzipan from almonds, just like they do with walnuts. I must admit that I take the almonds from the trees near the house; but because nut cracking is so time consuming, I still have bags full of almonds that may never get eaten.

The first flowers of the year however are not from a tree but spurt from the earth long before a new year starts. The first anemones (wind-flowers) begin to show their colourful petals in December. But these flowers are at their best when the almond trees are showing off – a scene that gives you a warm spring feeling.

After these first blossomings, other flowers follow in a quick succession – like blue grape hyacinth, irises, red anemones, dandelions and marigolds and soon you will loose count of what will be next.

However, along with the almond blossoms and the anemones there is another flower that starts pretty early in the year: the wild orchid. These flowers are a bit more modest and if you don’t really look for them it is easy to overlook them. The wild orchid secretly adds it colours to the landscape and is so small that most people will have never seen her that early in the year. On January 31st orchid specialist and photographer Jan van Lent discovered a few Ophrys (fusca ssp.) sancti-isidorii on the island and possibly some Ophrys (fusca ssp.) lindia. Astonished to find them so early he immediately set off for more orchid hunting, resulting in proof that orchids can also be placed amongst the earliest flowers to bloom in spring, along with the anemones and almond blossoms. On February 13th he even found a flowering Himantoglossum robertianum (the Big Roberts orchid), which is considered to be the biggest orchid in Greece.

These names may not conjure up familiar images for people who are not conversant with wild orchids. But when entering this orchid world, a new universe will open because there are many kinds of orchids, divided in families, species and subspecies. A layman might not see the differences in subspecies but the orchid specialist who studies these flowers does and exchanges his findings with other connoisseurs.

Orchids do have something very special that other flowers do not: they still continue to develop new species. It is a flower world in motion that keeps the orchid hunters also on the move. Because not only new flowers get a name; there are orchid specialists who even rename some of the species. So when you have just determined which orchid you have found and if you have not read the latest publications you may be driven mad because professor X may be calling the orchid ‘such’ and mister Y will call it ‘so’. Who is the Pope of the orchids?

It sometimes drives Jan van Lent crazy and he wonders why some people have to rename a flower. I mean, you ask for roses and you then get tulips because someone has decided to replace the name of roses by tulips. The orchid world is a strange one with lots of naming and squabbling.

Orchids also do get eaten. Their bulbs are unearthed in order to make flour, which is used to make a kind of power-drink named salep. This milky drink used to be consumed in great quantity in times when coffee was still too expensive for many people. Whilst the drink is now forbidden in Europe, in Athens, for example, you may still find street vendors trying to sell this drink. Although it’s not certain that they sell the real orchid-salep or whether they make this with milk and cornstarch.

Wild orchids are protected flowers: do not touch them, just look at them. When you really look for them, you will discover small amazing beauty queens that can be admired only when you really try hard, just like when looking for mushrooms or wild asparagus, other products of nature that you only will find when you really concentrate.

So whether you are already mad for orchids or would like to take a chance that you will come under their spell, spring and early summer on Lesvos offer you the opportunity to see them.