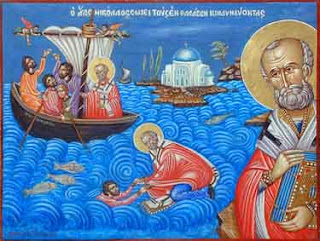 Christmas on a Greek island still remains a bit odd. In daytime you can enjoy the sun in a Christmas tree decorated t-shirt. But once the sun kisses the sea, a wintry cold creeps up from the ground and then a hot spiced wine (glühwein) taste as sweet as a Christmas angel on your tongue, just like past Sunday, when hundreds of people came to the Christmas market in Molyvos.

You may throw a party on the 6th of December in honour of the little Holy Baby in his manger, but this day remains first and foremost the Names Day of Saint Nicholas, in Greek Ayos Nikolaos. He is amongst others the patron saint of children and of everybody travelling over water. I’m sure that all Greek islands have a church dedicated to him. On Lesvos you even may find a Saint Nicholas church in each harbour, and that is very much needed, because saving lives has become a daily matter here.

The Holy Nicholas originally comes from Patara, nowadays in Turkey. As the Bishop of Myra he helped poor children and saved people from the sea. Now that masses of refugees use Turkey to come to Europe, he will be the saint responsible for a safe journey over the Aegean Sea.

European politicians may have celebrated this childrens’ event (especially in Holland), eating lots of sweet and with their hearts at peace, because they shifted their guilt to Greece and they have dropped an enormous bag full of money in Turkey, so that no refugee dares to enter Europe anymore. Naughty kids in Holland can end up in the big bag of the coloured helpers of Saint Nicholas and I think that those Peters should cram those politicians playing Judas in their bag and transport them to Lesvos. There they will have to participate in a cold night wake in order to see what their faulty decisions have caused: devilish Erdogan has caused the refugee stream to dry up, just to show that he is the boss over Europe and that he has sent his smugglers for a Christmas Holiday. Those few not obeying Erdogan will have to play at being real smugglers, using the night as their cover: now the refugees do the crossing mainly in the pitch-dark, regularly choosing the longer route to Mytilini, which makes the journey even more dangerous.

As far as I can see Turkey does not have a patron saint, but Greece does: Saint Nicholas. Now look at the Greek people! Entirely in the spirit of their patron saint and with the help of lots of gifts from abroad, they are trying to give the refugees dignified shelter.

The patron saint of Lesvos is the archangel Michael (Taxiarchis), who normally is pictured like a fierce fighter out of a modern computer game. He regularly uses his weapon. According to believers the last time he took up his shiny sword was during the Cyprus crisis (1974), when his mural painting at the Mandamados Monastery disappeared. It reappeared within a week and several Greek soldiers vow that in the time between, they fought their battle against the Turks side by side with Michael.

This combative archangel also is no stranger to Muslims. Mikal is known to have fought against the devil. That he did not win that battle proves all the evil that still is around. Since the death of Mary (who died in Ephese, also now in Turkey) Turkey has been the centre of several powerful empires, like the Byzantines and the Ottomans. Today someone else is enthroned in Turkey dreaming of another megalomaniac empire.

These days feel like we are in the world of Game of Thrones, where rulers and politicians are blinded by wealth and trample their people; they play dirty tricks and fight each other, while in the background, not a new Ice Age, but the warming of the globe is the real enemy.

Jesus’ father Joseph is the protector of a long list of people, amongst them the refugees. But he has so many to protect that it seems he may not be up to his task. I think the refugees better stick with Ayos Nikolaos, who, believe it or not, was the precursor of Santa Claus. Lighting a candle for this white bearded man could be a good idea.