The Riviera of Lesvos 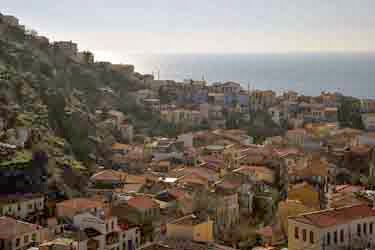 When I travel through Lesvos I regularly come across places that are totally distinct from other places on the island. For instance the point at Avlona with its turquoise blue bays. And each time I arrive in Plomari on a sunny day, I get the same feeling: it is like entering a little city on the French Riviera rather than on Lesvos. In some way the sunshine seems more intense with all the white-blue houses reflecting that light. The houses seem to be glued to each other or towering over each other, because built against two mountainsides, and that is why you get the idea of a real city.

Plomari (the second most populated town of the island) is a relative new city by Lesvorian standards: a coastal town, only having been built in the middle of the 19th century. It originally was not situated on the sea, but rather higher up in the mountains in the place we now call Megalochori. In the years 1841 to 1843 several big wild fires left Old Plomari in ashes; the inhabitants fled down the river Sedounda to the coast where they started a settlement that grew into the Plomari of today. Building a city on the coast was then feasable as the pirates had stopped terrorizing the Greek islands. For centuries people lived hidden in villages deep in the mountains, hoping to remain invisible to the buccaneers and only in the middle of the 19th century did this threat came to an end.

For the Plomarians hope was not lost, instead a new life was started: houses and factories were built and by the beginning of the 20th century this little city had 12 soap plants, 10 olive presses and numerous shipyards. In those times the Plomarians were world reknowned for building ships of 20 to 150 tons and their own commercial fleet consisted of far above 100 wooden boats (kaikis).

Now most commercial buildings have fallen down or are on the verge of perishing, as are the numerous huge mansions of the rich Plomarians, many of which have only their façade left standing. The rich people of today do not seem to want to restore the big industrial buildings or old houses: they do not even want to live in the city: on all the hilltops surrounding Plomari you see large modern villas arising.

There is however one industry that has survived and that is the ouzo business. In the Capital of Ouzo – as Plomari is called – different plants still produce ouzo according to old family recipes and it is said that the Plomarian ouzo is the best of the world.

Just driving to Plomari is a pleasant trip. All three (main) roads leading to Plomari are something special: the busiest one parallels the Gulf of Yera, going through the village of Papados and before it reaches the Riviera of Lesvos at Agios Isodoros it serpentines through a narrow and spectacular ravine (named after the little church of Agios Fanourios). Another – wide and quiet – asphalted road leads high over the mountains, just under Olympos, through the charming villages of Ambeliko, Akrasi and Paleochori to the Riviera of Lesvosat Melinda and then continues over the most spectacular coastal road of the island towards Plomari, with high and steep cliffsides falling into the sea. The third route follows the river Sedounda, the lifeline of Plomari, which cuts the town in two parts. This last way might be the most beautiful and, from very high in the mountains, it meanders along the river through an impressive green jungle of trees, climbing plants and flowers. Just before the beginning of Plomari you feel you have entered another century because of the big old houses, connected to the road by wooden bridges. And then suddenly the rich green vegetation stops and you are blinded by the intense sunlight, the white houses and then a little later by the blue sea with its shimmering patches of glittering sunlight.

Now that I have called Plomari and its coast the Riviera of Lesvos, I will mention another paradise-like place with views over this Riviera. High in the mountains above Agiasos on a mountain top between the hamlet of Karionas and the nearly deserted village of Milies, is a place which I love dearly: Toumba, an organic farm with horses, where you also can rent one of the five very charming and neat cottages that are built on the mountain slope. It has a simple café and from everywhere a magnificent view over the Riviera of Lesvos, across the sea to Turkey and to the neighbouring island of Chios and the mountain ranges around Olympos. If you prefer rest and nature to the vigorous life of Plomari, then Toumba is a great base for mountain walks (by foot, horse or mountain bike), or a trip to beautiful Plomari and its surroundings.