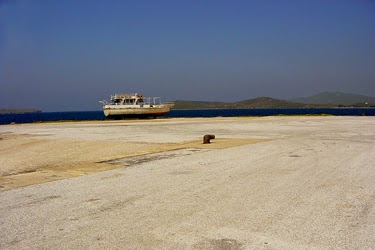 Who doesn’t like to hang around on the quayside of a lively little harbour? On an island like Lesvos there is a great choice of idyllic little ports where you can enjoy the sight of fishing boats and fishermen coming and going.

In earlier times fishing harbours tended to be outside the villages and in them you’d only come across the fishermen, some of their children and lots of cats. Fishermen were poor and so the harbour was a poor place, full of mud, garbage and the odd bucket to sit on while repairing the nets. In some places there would be a small ouzeria to slake the thirst of the workingmen, but that was all you could get. Daughters of a fishing family were not sought after for marriage; living by the sea meant poverty.

Nowadays it is the opposite. Having a house at the seaside is considered a luxury of the wealthy. The closer your house is to the sea, the more you are envied. Also the harbours have changed. They have now been found to be a source of entertainment; in the popular ones you may find plenty of cafenions and a fisherman is seldom alone mending his nets.

The little harbour of Skala Sykaminia is said to be the most beautiful on Lesvos. Beautiful fishing boats come and go, a gang of lean cats watch closely for the boats’ arrivals and the quay of the harbour is cluttered with restaurants and cafes, where the fish metaphorically jump from the sea onto your plate.

The harbour at Molyvos offers even more in the way of terraces and boats, everything from small caiques and fishing cutters to the fast boat of the harbour police and some yachts. However at Molyvos at least, you will not find those huge and luxurious yachts of the rich.

It is along the extended quays of Mytilini that you will find the more frivolous cafes and also the bigger boats like the ferry’s going to Turkey or the ones connecting the island with the rest of Greece.

The second town of the island, Plomari, also has a pretty large harbour, although filled with mainly fishing boats. Along the quays of this southern city, you will find an extended choice of hangouts, similar to Skala Kalloni which also has a small number of restaurants around its fishing harbour.

A harbour possibly even more picturesque than that of Skala Sykaminia is Skala Polichnitos. It is the centre of the shellfish trade and sometimes you will see a big cargo boat, looking bigger than the entire village, moored at its small quay. These kinds of cargo ships also come into the harbour of Petra – a harbour with no drinking place. Here the ships are loaded with sheep, or the salt that is delivered by road from Skala Kalloni. I always wonder why this salt cannot be transported to Skala Polichnitos instead of being driven over the small winding road from Kalloni to Petra. I understand that the Bay of Kalloni at the end is very shallow, but surely they could organize a fleet of small caiques to ferry the salt across the bay to Skala Polichnitos. Those big salt trucks on the road are a real annoyance (and sometimes called ‘Assault’ trucks).

The harbour of beautiful Gavathas has a quay nearly as big as the village and you would expect that they would use the space for a bunch of cafenions in the summer. But this huge paved place is as empty in high season as it is in the winter. There is only a fashionably old and tiny ouzeria, hidden somewhere above in the middle of the main road (this tiny village must have – what? – 5 streets), to provide the fishermen with an ouzo and mèzes (as does the restaurant at the beach).

Sigri, another small village at the most western point of the island, also has a similarly spacious quay. Her harbour has been provided with a huge concrete square where daily you can expect to see a ship as big as the Titanic. There are also rumours that there is a secret submarine base, but if so, then they must be unmanned submarines, because I’ve never seen a marine. Or maybe the crew and technicians have a secret access tunnel?

Adorable Sigri feels a bit like the end of the world. Mostly there is a lot of wind; tourists and inhabitants are scarce and the surrounding beaches offer plenty of occasions to spend days without seeing anybody. But suddenly this quietness has become endangered: plans have been announced for a big commercial harbour. But maybe they are, in fact, old plans; maybe that is why the quay is already so big and we know already the water is so deep that big boats already can moor at Sigri? Having a commercial harbour means that you will also need big roads. So two years ago a big fleet of diggers started to redo the road from Sigri to Kalloni, along with some additional building roads.

If I understand correctly, the Egnatia SA company got the contract. The same company was also responsible for the building of the Egnatia Motorway, a highway cutting through the mainland of Greece, following the ancient Via Egnatia, famous since ancient times (and especially in Roman and Byzantine times) as the main connection between the Adriatic Sea and the Black Sea. The 670 km long road connects 332 towns and villages by road, high bridges, tunnels and complicated intersections. So you would think that they have good road building expertise; but the unruly west of Lesvos got them on their knees. The works overran by so much that the job was abandoned. Meaning that the bickering over the realisation of Sigri Harbour and its highway to Kalloni has begun all over again. The result is not yet known, especially now that there is a new government with new ministers who have to sign for any continuation of this project.

I suspected that the people who planned the road had done so in collaboration with the megalomaniac windmill parc, but I was wrong. The rebuilding of the road was because they want to build a huge harbour at the end of the world. For whom or for what do they want that? For the empty West, for goods for Mytilini? I thought the capital already had its own port. Or has Kalloni grown so much that it wants also a port for itself?

At least the Natural History Museum of Sigri will be happy: because of the works done until now, they were able to increase considerably their collection of petrified trees. The people who love the quietness of this sweet village no longer have sleepless nights and the restaurant at the harbour of Sigri will, for the moment, remain a hot spot for food lovers, and for the time-being not spoiled by building activity nor huge boats hiding the seaview.