The struggle of a writer 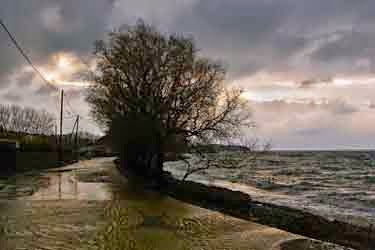 Cold, rain, grey weather and only sometimes a sunny view on a colour field full of flowers: where is the radiant Greek Spring? It is clear, this year spring is stalling at coming out.

This odd weather is not particularly healthy. For the second time this year I have caught a flu-like something: sore throat and a light fever. Well okay, obviously not that light. After I had slept a lot throughout the day and then at night when I closed my eyes again, it seemed like I’d descended into Dante’s Hell. I was musing about a subject for a new column and was thinking about the paucity of flowers seen this winter-like spring and then colourful visions of spring flowers as big as monsters entered my head and these transitional thoughts were so powerful that they nearly choked me.

I suppose I could write about the aggressive great tit who has become a constant on one of my window sills, thinking to see a concurrent in its reflection and now for weeks has tried to break the glass with his little beak, along with quick tempered flying up-and-down when he has not succeeded. This heady little bird changed into a big black crow and then more crows came, so many that my windows looked black and the softly ticking sound of the great tit changed into a fearsome drum-like composition with a whipping rhythm. Suddenly the black mass opened up and a really scary flying dragon with open mouth showed up, throwing lasers of fire against my window. Well, it is good to know that my windows don’t let rain or wind through, nor the nightmare.

I was also thinking about the ants that assaulted the kitchen last week. I thought that these little nitwits only entered houses in times of heat waves, but this month for sure cannot be presented as a heat wave. It might well be weather to walk without coat, but soon enough an icecold wind will pick up, or it could be raining cats and dogs. In my dream the ants besieged the countertop in large rows, changing into the disciplined armies like those of Danearys, wearing armour and shields. They were stopped by a bowl of water where in the middle I had placed the honey for safety. Then the army changed into a mob of horses escaped from the Wildlings – skeletons with pieces of meat clinging. But these animals could not see a way to overcome the water and the assault on the honey was lost.

Even though some of the images were really frightening I was not scared. The only thing I cared for was preserving the images and so I ordered myself to ‘download’ the images or make mental ‘screenshots’ so that I would remember everything because this could be an idea for a column.

When I woke up I looked around, a bit besotted: where could I have sent all those fabulous pictures I took in the night? Not on the computer, because it wasn’t even on, nor on my telephone because it was nowhere to be found. Even though I did not have a very peaceful sleep, I had to laugh about myself: because of the fear of not finding a subject to write about and the fact that the electronic media had entered my dreams. And – people watching this tv series will probably have recognized – it is not such a good idea to watch Game of Thrones when you have a fever. This beautifully made, but violent fantasy series about a world in war, is excellent material for nightmares.

The pain and fever are down a bit, the armies of ants have disappeared like snow in the sun, the great tit still molests the window in order to eliminate his concurrent and I had plenty of time to search the electronic highway for the latest news of the island. But nothing has inspired me to write.

Even though the island has woken up from its hibernation and everywhere gardens are trimmed and hotels and restaurants are cleaned to the bone for the coming season; even though the sound of the chainsaws is dominating the few singing birds and the well-known gossips and whilst this kind of throat-flu, which can hardly be evaded, still hangs about: with the exception of the weather, there is nothing new here. Restaurants are for sale, but when not sold for their ridiculously high asking price, they just will open again, and the biggest question – just like last year – is when will there be a boat to Turkey from the harbour of Petra.

Now that the spring has not sent any warm warnings and has us still fighting with this exceptional Greek weather, I can barely imagine that there is a real summer to follow. You could almost believe that we have landed in the magic of Game of Thrones, where the world is threatened with a year’s long winter.