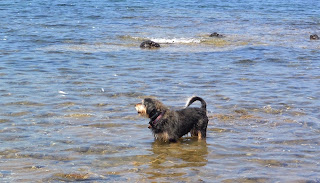 There are some days – and there are plenty of them here on the island – that Lou Reed’s song A Perfect Day keeps popping up in your head. For example when the sea is smooth as oil (as the Greeks say), transparent and of a spellbinding blue colour. On such a perfect day last week I came to the sea and saw she was covered with white speckles. What was floating in the water?

I concentrated on the spots and realized they were thousands of little fish floating in the sea. Bah. What was the matter? I had come to cool off a bit, so I decided to have a quick swim. However after just a few strokes I recognized the fish as sardines, I wondered what could have caused their death and I ran out of the water. Together with some bystanders we gazed at the sea swarming with fat sardines, and we alerted the coast guard.

Some hours later I returned to the beach, curious if I would find a sea full of water or fish. I was bewildered to see some men happily collecting bags full of sardines. Were they cleaning the sea? The men laughed at my concern: “No, no, the sardines are good!” Eat, eat, they gestured. I indeed did remark that the fish hadn’t ended up on the beach. Were they dead or not? Someone told me that probably some fishing nets had broken, which is why the sea had turned into a free market: you could just pick up the tasty fish from the water. I watched the men stuffing bag after bag with the fish and decided that the sea was safe enough to have a swim and went to look for a patch of sea less fish-rich.

While floating in the sea like a fish, I wondered why a sardine – chosen by destiny to be freed from a fisherman’s net – would not swim away, and would instead, just like me, end belly-up rocking gently in the slow wash of the sea. A little further into the sea I noticed small sparkly backs, summersaulting above the water: there clearly was a school of fish passing by. I began think about the Sardine run, regularly taking place in July in South Africa. Milliards of sardines participate, even that though they are in danger of being eaten by bloodthirsty sharks, other predatory fish, birds, fishermen and tourists who come in great numbers to see this spectacle. I wondered if somebody might have organized a smaller Greek sardine run, all those floating fish participants, being tired or taking naps. If this was the case, then there might also be swarms of predators around, because this sort of event never remains a secret for long. A little anxious now, I closely scanned the water around me, looking for that well known black triangle. But even the sea gulls still seemed unaware of what was going on. But I was not much reassured and, like a wise sardine, I returned onto the safety of the beach.

Lesvos is reknowned for its sardines. The papalina sardines from the Gulf of Kalloni (and of Yera) are the emperors of their kind. It is said that these fish get fatter and thus tastier than those from the open sea because they live off special phyto plankton that grows in those warm waters.

Maybe the mini-run was on its way to the Gulf of Kalloni and got lost (the mouth of the Bay is not that wide) and tired. Or maybe they just fled from there, afraid of the coming Sardine Festival in Skala Kallonis, where hundreds of sardines will participate, though on the grill or buried in salt. Whatever it was, the next day not even one lonely sardine showed up, neither floating on its back, swimming or washed ashore. So with no worries, I jumped into the sea: another Perfect Day.