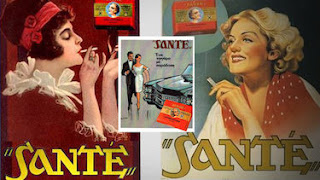 In 1604 king James VI of England said: A custome lothsome to the eye, hatefull to the Nose, harmefull to the braine, dangerous to the Lungs. Not everybody agreed with him: tobacco was said to be a medical cure for lots of things. The Spanish brought the plant from the South Americas around 1530 saying it was a miracle plant.

I have to admit that I am still a smoker, even though they now put those horrible pictures on the packs of cigarettes. But I am back to the roots of the tobacco: I smoke natural tobacco from the Mohawk indians. I know: that is no excuse for not quitting, but it does let you smoke less. Most harmful substances in a cigarette are added by the manufacturer; by smoking ‘natural’, I do smoke a little ‘healthier’.

There were times that half of the world smoked without worries. Looking at movies from the Sixties and Seventies, the smoke vaporizes from the film screen. One of my favorite scenes is the one where Melina Merkouri sits on her bed, a cigarette hanging at her lips, while she plays a record on her little record player in the movie Never on Sunday. Greece still is a smokers country, even though the e-cigarette is marching in. However I cannot imagine a movie where an e-cigarette is elegantly lit.

There were times that people got rich from smoking, as was once the case on Lesvos. When tobacco mania hit the Ottoman Empire, more and more tobacco fields popped up in the landscape. The North-Aegean islands Lesvos, Samos, Chios and Lemnos switched grapevines for tobacco around the end of the 19th century, at the same time a fatal illness of the vines ended viticulture. There was gold to be earned with tobacco, because apart from official trade – the old pirate blood still not quite cold – there was a huge market for smugglers.

Lesvos enjoyed its last Golden Century (around 1900) thanks not only to olive oil and soap: tobacco was also a mighty export product. Newly purchased steam machines and steam boats made transport much quicker. The country changed: clever traders entered the villages, buying, legally or not, the harvests. There came a new class with workers in the production plants, that quickly got organized against exploitation.

Until the last years of the Ottoman Empire smugglers were rarely chased, the police themselves often involved in this illegal business. For everybody it was also seen an act against the Régie Company, that, helped by foreign bankers, had a monopoly for all tobacco in the Ottoman Empire. At the turn of the 19th century it was estimated that half of all people smoked cigarettes from the Régie Company, the other half the much cheaper and often of better quality tobacco from the smugglers.

Did people smoke more because of the downfall of the Ottoman Empire and the several wars taking place at the first half of the 20st century? The tobacco industry kept on growing during the destruction of the old world. Refugees were put to work on the fields and the factories, where lots of women worked, kept on turning. After World War II American cigarettes conquered European markets. The American Cigarette Cowboys anointed their fine cut tobacco with plenty of chemicals, thus increasing its ability to addict. We did not know that in those times. This development however was one of the causes for the Greek cigarette industry’s diminishment. In the Sixties the tobacco fields disappeared from the landscapes of Lesvos, together with thousands of people who emigrated to cities and abroad, fleeing poverty and the hard work on the fields. In the north of the island they then started a new industry: tourism.

After viticulture and the tobacco culture, now tourism is increasing on the island. It is said that this is due to the negative publicity around the refugee crisis, that is not or not enough dealt with by the European Union. The absence of long white, sandy beaches and world famous archeological monuments will never make Lesvos into a destination for mass tourism, so much wished for by some people.

Times have changed and that requires adaptation. Because of its geographical position refugees, looking for a safe place, will keep on passing through Lesvos. Mass tourism will never reach the island. And smoking will never ever be healthy again.