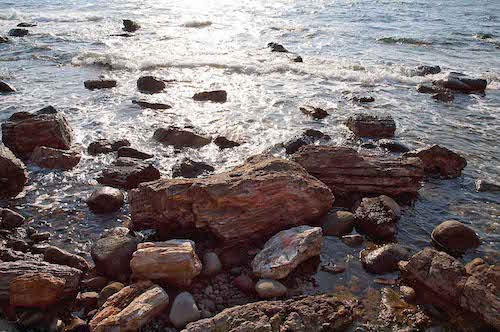 The tectonic plates under the island will never give up dancing. In small steps they shift and brush past each other, a tango in slow motion (2.0), and nobody knows if they will fall back to sleep or will continue with an up-tempo: we still depend on the moods of the gods, or Mother Earth.

Some days ago I was on an excursion to the little island of Nissopi, the newest part of the Petrified Forest Park of the Natural History Museum of Lesvos at Sigri. There my fantasy really got triggered: I tried to imagine what would happen if the earth were to take revenge over our abuse of her wealth, for example by opening wide her volcanoes. We are used to natural disasters: a storm here, floods there or an earthquake elsewhere. But the forces that were released millions of years ago on the island are unimaginable. Huge rocks and lava spitting mountains, that vomitted all their innards with inhumane force, causing oceans of fire, tsunami’s and earthquakes. It must have been hell on earth.

Everywhere on Lesvos you will see witness to these events: lonely enormous rocks hurled just about anywhere, volcanic stones pressed or moulded into artistic forms and other impressive rock formations. The island must have been pretty shaken. The best finds however are due to sheer happenstance during the madness: after the firestorms, cloud-bursts with lots of water flooded the ravaged region, causing a large part of the trees to become petrified rather than carbonized. Lesvos hides plenty of them, just like the little island of Nissiopi.

At my feet a little beach full of petrified tree trunks and shards, lying as innocent rocks in the sea, their smooth surfaces glittering in the sun. Brown, red, but also yellow, orange, green, blue, these fossils look like treasures washed ashore from the Cave of Ali Baba. The inner wood often conjured into half precious stones. My fingers itched to pick up some of the smaller pieces, shining between the sand. But the guide was serious: “Do not touch anything!” So I behaved myself, knowing that I already have some small stones, collected from other beaches where the waves casually deposited them in the sand. I looked around this amazing little beach, protected by walls of lava layers, some exposed petrified trees still stuck in there, many tree trunks still standing, their roots safely nestled deep in the earth. It was like standing in a million year old wood.

“The sea was not here in those days,” the guide said and I gazed out over the water, stretching itself as blue as heaven towards the indefinite sky and wondered where would the sea have been in those times. I knew that millions of years ago Lesvos was part of the Asia plate – just ordinary main land.

I looked at the various layers of volcanic deposit, stapled under hills which were laid naked and I shivered: imagine if you were out for a day in this forest of mammoth trees (sequoia’s), their tops reaching almost a hundred meters into the sky. Just as you spread a cloth under one of those impressive trees and opened your picnic basket, there was a thundering noise. It all could happen very quickly (proved by the excavations in Pompeii, where people were buried alive). The trees may have been chatting to each other and then suddenly it would became dark. Thick, grey clouds of ash would descend from the tree tops and branches, like a black snowstorm, cutting the oxygen supply. That is how these trees and everything what lived below died: by suffocation. Some trees were taken by streams of mud and other volcano junk and came stuck on the ‘not yet’ an island. Maybe this island just consists of those drifting trees, caught between the broken trees of the forest embedded in layers of ash and spitted rocks.

However, the absence of the sea at that small island kept me wondering. Once there must have been a fascinating forest full of trees, that only after they were immortalized in ash, met the sea, that patiently but persisting, started to nibble at the ash, thus freeing the trees.

Now with global warming and the rising of sea levels, you could think that this is no new phenomenal at all. Sea water for millions of years has slowly crept up the land, filling valleys with water, thus creating islands. But most Greek islands were created by heavy earthquakes, tearing and shifting the earth crust, even absorbing whole villages, like ancient Pyrrha in the Gulf of Kalloni.

Imagine if it were to happen to you: living in a vast country, then the earth trembles and hoppa, you find your house standing alone on an island, surrounded by water, mountain slopes disappeared into the sea, only their tops towering above the waves. It is said that the Greek islands are part of the foothills of the Alps. I am still not sure when the Gods decided to create the Greek island empire, only that is was long after these mammoth trees disappeared under the ash.

You cannot compare petrified trees with those cute ‘prehistoric’ animals that mooch about the Galapagos islands. I dare to say though that, for scientists, Lesvos and Nissiopi are just as important a Valhalla as the Galápagos Islands. Maybe there are fewer animals for visitors to cuddle, but those beautiful, very old trees invite you to fantasize like crazy about the fascinating, lethal monkey business of Mother Earth.