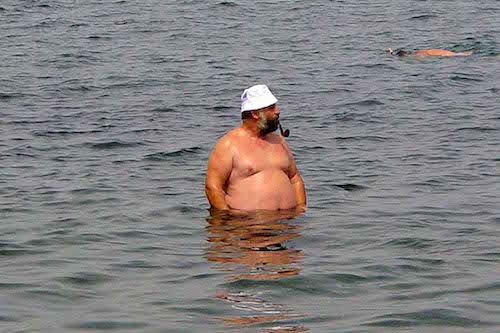 It is generally known that a pinch of salt makes food taste better. Around 4 centuries BC they even drunk salty wine in Greece. This speciality was accidentally invented by a slave on Kos who added seawater to the wine, in order to reach his production quota. The salty taste became a success and the wine was also made on other islands.According to the Greek philosopher Strabo, this salty Koan wine could easily compete with the (in those times famous) wines of Lesvos.

I have no need to taste a wine diluted with seawater; I can very well imagine its strange taste. Cooking with seawater sounds better. There are different brands of seawater on the market, more than one chef cook uses it as his secret weapon and tempting recipes roam the internet. Seawater is not a stranger in the Greek kitchen: fishermen use some of it to brew their famous fish soup kakaviand for centuries olives and fish have been preserved in seawater.

A strange sea creature that is put in seawater mainly by fishermen from the island Kalymnos is spinialo, a sea squirt (Microcosmus sabatieri) that can appear in many colourful guise. The Greek spinialo however is boring black and looks like a lumpy stone, or a sturdy, black sponge. When squeezed, its yellow insides come outside. During the hunt for sponges, fishermen also take these soft, black skulless animals, store them in seawater, sometimes mixed with salty sea urchins or fan-mussels. The salty water preserves this speciality during the time the fishermen are at sea, sometimes for weeks. I love sea urchins, but I wonder if I would dare to eat this spooky looking substance.

10 liters of seawater contain about 2 coffee cups of salt. I didn’t know that there are different kinds of salt. Seawater has 5 kinds: sodium chloride, magnesium chloride, sodium sulfate, magnesium bromide andcalcium chloride. Oceans and seas vary in their salt concentrations. The Mediterranean sea is high on the salt list. The further east you go on this sea, the saltier the water is. So the water surrounding Lesvos is quite salty.

I decided to start making pasta with seawater. I filled a bottle with northern Aegean seawater, cooked the salty liquid and passed it through a coffee filter (just to be sure that there was nothing unwant in it). As it happens the filter looked very clean.

On the internet it is advised to collect the water as far out from the coast as possible; you do not want contaminated water. I can imagine that if you fill your bottle from a beach with people afloat in the sea (who knows what else they do there) – then the water will be less clean than further out at sea. But I am not intending to swim some kilometers into the sea, just to obtain cooking water for pasta. Apart from that, in these years of crisis in Eftalou it is unusual to see more than five people on a beach, let alone in the water.

After cooking and filtering, the water was ready to cook the pasta: I filled one pan with 2 big frappé glasses of tap water and 1 glass of seawater. In a second pan I poured 3 frappé glasses of tap water with a teaspoon of salt. The result: the pasta cooked in part-seawater clearly tasted better. It could have been that that pasta contained more salt: I didn’t check if 1 glass of seawater contains 1 tsp of salt. But nevertheless it was confirmed, as claimed on the internet, that food cooked in seawater is more tasteful.

The salty seawater can be a healthy alternative because it still contains plenty of minerals that are deleted from the table salt when cleaned. But be careful: too much seawater can give the same result as using too much salt. And not all salt can be replaced by the seawater: a splash of seawater over a tomato salad or a fried egg will create only a watery mess.

Lesvos with its flamingo-rich salt pans of Kalloni and Skala Polichnitos is a heaven of salt. However not all shops sell salt from Lesvos. Lesvorian salt deserves more attention. As does the water that surrounds the island: an offer of bottled seawater would be a great new item in souvenir shops and supermarkets.