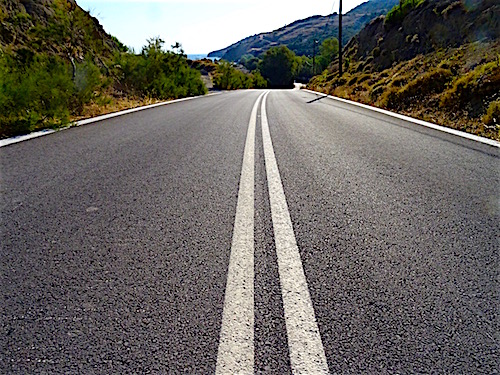 My daily morning walk takes me along the Eftalou Boulevard, as I call the road that runs along the coast there. The only movement is the undulating blue sea nibbling at its beaches, while once in a while a breath of fresh air ruffles the trees. Everything seems abandoned, even though it is mid July. I remember years when even at this early hour there would have already been plenty of tourists taking a walk or jumping into cars for an adventurous day trip. I can remember years when you might bump into a herd of donkeys, or some lost horses. But now there is no cattle nor any human being. Only the droppings of some quadrupeds that went through much earlier into the mountains, leaving obvious tracks. My dog loves those little droppings, so each time I have to warn him: dirty dog!

I peek if there are arrivals in the rooms of the guest houses and count the number of sun beds arranged around the pool of a hotel that will probably soon open and it looks like they expect a fairly large group of people. I am now so used to the silence that I am already being disturbed by the gardeners (their presence forewarning the opening of a house or hotel), let alone a group of loud tourists. But I know that most of the guests in that hotel will move from the breakfast table immediately to the sunbeams at the pool, ignoring the chattering sea. Everybody has his own style of holiday, I guess.

The roads on the island have become more quiet. I wonder how much the number of inhabitants of the island has gone down. Even the number of refugees has decreased considerably. Watching out over the sea, I no longer see them coming. No long dark stripe with orange above it, the recognizable sign of a refugee boat. They still arrive, but only a very few know how to avoid the guarding ships that can push them back to Turkey.

A few years ago the road was newly resurfaced with asphalt and decorated with serious white lines at the sides and in the middle. This hasn’t helped to bring back more traffic. Busses, rental cars and taxis have now become a curiosity on the road. The only people touching the slick asphalt in the morning are the farmers, whose sheep and olives keep the island going. (And me and my dog.)

Sometimes a mask passes with the wind: the new waste. Otherwise there is no reminder of Corona on my daily morning walk. Not long ago I still had to fill in a note saying at what time and why I was on the street: one of the Greek corona-rules. I now do not even carry a mask with me, not expecting to find myself in the middle of a crowd. The road remains pretty empty.

Normally you walk along the side of a road. That is what I was taught as a child. And preferably you should stroll on the side of the road where your nose is in the direction of the upcoming traffic. However I have become obsessed by the two parallel lines in the middle of the road, that have suddenly appeared on my walking route. When you walk between those lines, your eyes directed to the ground, you can easily get hypnotized: you have to follow them.

All this is possible nowadays – just walking undisturbed in the middle of the road. Six years ago on the same road you would have been threatened by careless driving tourists, speeding cars from life-saving NGO’s, or you could get lost in a mass of newly arrived refugees. Now the silence reigns and you can easily change stories with the Stellagama’s (I call those lizards harlequins), that are chilling on the warm rocks in the sun.

Once we had ‘car-free’ Sundays in the Netherlands. Then you were allowed to jump over the middle lines of the roads. The mornings in Eftalou remind me of them, even though the silence is sometimes broken by a farmer in a ramshackle car, a single runner or a sputtering motor cycle. This small amount of traffic does not stop me from walking in between the two middle lines on the road. It feels like a provocation: sticking up a certain finger against the world that is worrying because of the virus that not only eats lives but also disturbs so many lives. When you’re upset by the news and you step onto the Boulevard to follow the lines, going into the hills, away from the village, the landscape stretches before you lazy and yawning – an eternal landscape that laughs about our sorrows: each crisis is temporary.