The ugly duckling of Lesvos 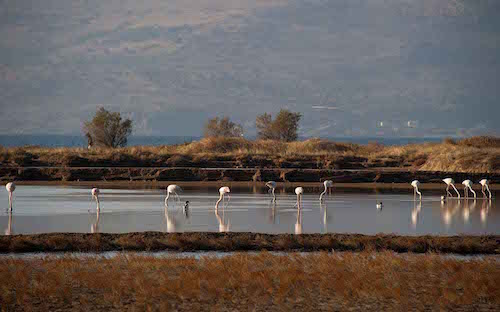 The capital of West-Lesvos is called Beauty, but on the list of most beautiful places of the island, it comes bottom. You cannot call Kalloni a pretty village with its multitude of houses of irregular style. It has no cozy village centre, like Andissa and it has an irritating busy, narrow highway that cleaves the village in two.

Last week the name however sounded from many lips, because Margarita Nikolaidi – from Kalloni – won, whilst laughing and chatting, a famous television cooking competition and may now call herself Masterchef of Greece. It is a culinary first for Kalloni, because this little towndoes not have a real culinary tradition: all you will find there are some taverns where you eat what is served that day and for a real restaurant you have to go to Skala Kalloni, that in summertime becomes a sardine hotspot. Salted sardines (sardelles pastès) are one of the specialities of the island.

It is no fun to live in Kalloni: in the summer it regularly has the highest temperatures of the island and in the winter the lowest. Just as it has the most rainfall on its roofs. Kalloni lies between 2 large rivers, that in the dark days flow at top speed. On the Gulf, Kalloni’s namesake Skala Kallonis has many wet lands and salt pans, making this seaside village the centre for bird watchers. Flamingos, meditating between the drying piles of salt, used to be on the menu of the Romans. I wonder if Margarita would dare to prepare some of those crazy Roman recipes, like marinated Flamingo tongues.

You could think that Kalloni had once been destroyed by disaster as no fancy old buildings line its streets. Disaster did indeed strike twice, but many centuries ago. In the 5th century BC, when it was still the city state Arisvi, its enemy Mytimna (Molyvos) wiped it totally from the map. Its remaining history is wrapped in thick fog until the 14th century when the castle Paleokastro appeared, not far from today’s Kalloni. In 1445 the Turks thought it necessary to destroy the castle and the prosperous surrounding village. The region was then already called Kalloni. However it was only at the end of the Ottoman era (beginning 20th century) that the little city of Kalloni started to appear.

Kalloni may be the ugly duckling of the island, but the interesting history of its environment can fill many books (like ΚόλποςΚαλλονήςΛέσβου by Aristidis Kiriazis [2018]). For example you will find many old monasteries in the region, some of them still functioning. The largest and best known is the Byzantine Limonos monastery, founded in 1526 (or reopened after the Ottoman kept it closed for a while) by Saint Ignatius Agallianos, whose life included some miracles. One such tale is that on one pretty day Ignatius was surprised by heavy rain while he was on his way to the nunnery Myrsiniotissa. To hide from the rain he leant against a rock that then split open to offer him shelter. The rock still must be there, but it has never caught my eye during the many times I have made the same walk. There’s no sign pointing to this exceptional place, nor even a striking stone that according to some stories still has the contours of the saint. When on a nice day some friends and I similarly had to flee a heavy shower, there was no rock that took us in and we were totally soaked by the time we arrived at Myrsiniotissa, where we found shelter in the gatehouse on comfortable benches that awaited tired or wet walkers. You would think that this nunnery has been built on this rock in honour of what happened to Saint Ignatius.

Once there were plenty of castles in the large region of Kalloni. The area surrounding the Gulf especially is a Valhalla for history freaks: old walls in Apotheka and Makara, the remains of castles and watchtowers, the sunken city of Pyrrha, the temple of Messa, the mythological city of Issa and the Stone Age finds around Lisvori. The little city with a lack of charm, that exists because of its central location, its shops and municipal services, is a central core for Lesvorian history. If Margarita were to open a star restaurant in Kalloni, it would make it more attractive. But Margarita first plans to learn more cooking tricks from other European chefs. Until then, interesting Kalloni remains the ugly duckling of Lesvos.