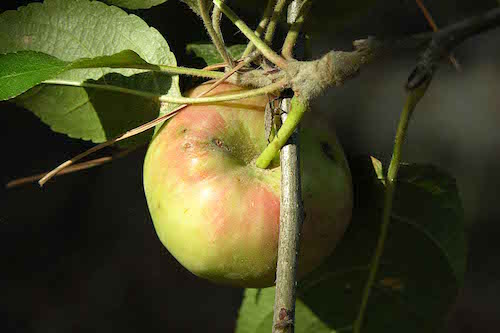 The big heat is over and immediately you feel the spicy breath of autumn. The trees are loaded with ripe figs and sweet grapes and the sun hurries more quickly to disappear into the sea each day. So, once again it’s time for preserving fruit — why just leave them hanging there to rot?

Besides figs and grapes, ripe apples are rolling out, especially around Kalo Limni and Agiasos. The apples from Agiasos are known all over the island. They are small sour little crab-apples (Greeks love sour food), but worms love them too, so you better use them up quickly: peel them, cut them into pieces, throw away the bad parts. I ask myself what the Greeks do with apples except serving them as fruit after a meal? You won’t find apple chutney in a Greek kitchen, nor an apple sauce.

On the internet I found a recipe for apple soup, milosoupa, not originally Greek, so it probably came with immigrants, it is made with a vegetable bouillon, curry spices, lemon juice, an onion, oil, salt, pepper and of course apples. I also found pork chops with apple, but only the name sounds Greek: brizoles girines me krasi. You bake the pork chops in one pan, in another you fry apple slices. The meat is finished off with some white wine, adding the baked apple slices. The dish is then sprinkled with cinnamon powder. There are other recipes: apples stuffed with walnuts, apples cooked in a sweet syrup and lots of different kinds of apple pie.

An apple does not necessarily remind you of Greece and yet it has a place in mythology. The famous Trojan war even did started with an apple. The goddess Eris – known for her sowing of discord and plots – was angry when she was not invited for the wedding of Peleus and the sea goddess Thetis, when other gods like Hera, Athena and Aphrodite were. So, like a furious fairy she threw an apple amongst the invited wedding guests, saying that it was for the most beautiful woman present. To decide who was, it fell to Paris, son of the Trojan king Priam and probably the most beautiful man there. He had to choose between Hera, Athena and Aphrodite. In true Greek style they each tried to bribe him — Hera with money and power, Athena with wisdom and Aphrodite with the promise he would be rewarded with the most beautiful woman on earth. Paris choose Aphrodite and so to make good her promise, she had to give Paris the beautiful Helen, wife of the Spartan king Menelaos. When Paris took Helen to his home in Troy, Menelaos gathered his allies and launched the war to get Helen back.

Apples were also involved in one of the twelve Labours of Herakles. Because, when bewitched by a god, he had murdered his wife and children, he had to work for Eurysteus, king of Mycene. The eleventh labour was to find and steal the golden apples from a tree in the garden of the Hesperides, the tree which Gaia had given to Hera and Zeus on their wedding day. Its golden apples had the power to give eternal life, and they were guarded by the Hesperides, the daughters of Atlas, together with an enormous snake, or dragon with a hundred heads. Herakles persuaded Atlas to go and get the apples, but while he did so, Herakles had to hold up the heavens. When he returned Atlas decided Herakles could continue with the job and he would go and give the apples to King Eurysteus. Herakles agreed, but tricked Atlas into taking back the burden of the sky and then ran away with the apples and gave them to Pallas Athena, who returned them to the Hesperides.

In ancient times if you threw an apple to someone, it was a marriage proposal and if they caught it, they accepted the offer. Let’s hope no true lover ever dropped one, because there would have been no marriage.

So apples are indeed part of Greek culture. They grow in orchards or in the wild on the slopes of the mountains here. I will not pretend that Lesvos is a paradise full of apples, but it is a paradise of fruit. Even the word paradise comes from fruit. In 401 BC the Greek historian Xenophone was so impressed by the walled fruit gardens of Persia, when he got home he made one himself — thus introducing the Persian word for walled garden, pairidaeza into Greek. In Latin it became paradysus and much later in English paradise. Lesvos is not exactly walled in, but the surrounding salty sea act like a natural protector for this amazing paradise of fruit.