Hear the wind sweeping through the windmills 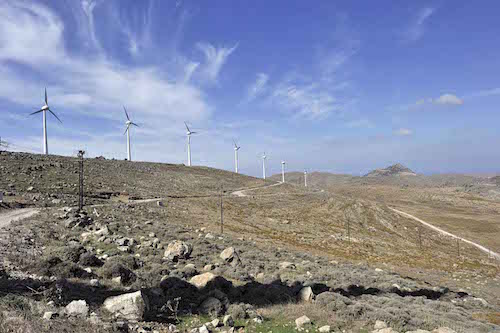 One of the more powerful sounds you hear on the island is the wind in the trees, especially during storms. Sometimes you hear the winds arriving from far away and the noise made response by the trees varies a lot. Olive trees rustle with a high pitch, the fine needles of the pine forest make a much denser sound – like the booming of kettledrums. The many mountain slopes covered with pine trees form ideal concert rooms for wind concerts.

In places where there are no trees but only hills and mountains to resist the wind, as in the desolate landscape of the West, some new instruments have recently joined the orchestra. This is the region where huge prehistoric sequoias once reached towards the sky, until thousands of years ago, when they were destroyed by volcanic eruptions. After a series of surveys and excavations some were revealed and displayed as the island’s famous Petrified Forest. But most of them are silent, buried in the earth, quiet witnesses to what once was an ear-splitting episode of natural music. Sequoias are the tallest trees in the world, up to more than a hundred metres! So imagine what play the wind must have made with them.

Nowadays the west of the island is an empty, undulating, hilly landscape, but still very appealing, because in the folds of the mountains you will find surprising green oases with woods and water falls, like at the mill of Krinelou, just above Eresos. And when you think of all the fossil trees still buried under your feet, you sense their connection with this otherwise mostly barren land.

However the emptiness is about to change. Driving from Andissa down towards Eresos and Sigri you will see the agents of that change: the wind turbines, huge modern windmills, installed on three hilltop ridges, a new forest of giants, which will eventually number over a hundred and fifty!

Wind turbines can be built even higher than the ancient sequoias – up to a 150 metres — but those around Andissa will be between about 50 and 80. Looking up from the foot of one these towers it’s difficult to judge its height. It is stabilized by huge pegs anchored deep in the ground, and during my visit the wind was blowing pretty strong and the blades were turning. Trees can be blown down by a gale and I felt a little anxious standing under that enormous colossus. Could it be blown down or lose a blade?

I counted about 25 towers altogether, each of which is said to generate two megawatts of electricity, and that, according to Wikipedia, would be enough for 2 000 American households. If you assume that a Greek household uses the same amount of energy, then the 25 wind turbines at Andissa could power 50 000 houses on the island. Lesvos has over the 90 000 inhabitants, so if you also assume there are two people in every household, these turbines could make enough for the whole island. The Rokas company has plans for 153 wind turbines altogether, which could supply 300 000 households. I do not know how much energy the factories and businesses use – and I don’t suppose sheep and goats consume much electricity – but it’s possible Lesvos could be self-sufficient from wind power, and even have enough left over to sell. I may have made miscalculated, and I don’t know a lot about this new green branch of energy generation, but standing under them, looking up at these impressive artificial trees frankly, I think wind turbine parks are a blight on the landscape!

The Netherlands is covered with them, so children in the future will probably take them for granted, but I don’t; although I don’t dislike them so much in the barren landscape of west Lesvos where they look as if they’ve always been, or like a monument to the long gone sequoias.

The sounds of west Lesvos will also change. The turbines have added a modern element to the symphony of winds: ‘vlaff-vlaff-vlaff’ go the blades, and no sudden gust doesn’t break their steady rhythm. But how will it sound when the wind plays on all 153 mills? There will be some very modern new music generated over this very ancient landscape!