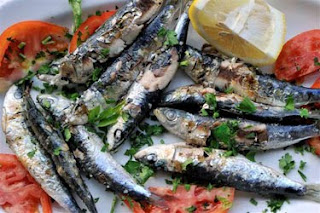 Between May and July every year a huge natural spectacle takes place off the coast of South Africa. The show starts at the Agulhas bank, where the warm water stream of the Indian Ocean meets the cold waters of the Atlantic. The show travels north, along the east coast of South Africa taking millions of sardines with it on a voyage as far as Mozambique. The migration of so many silver-toned fish does not go unnoticed, as hundreds of dolphins, seals, sharks and birds see an opportunity for a right royal feast, and make their own show chasing this enormous cloud of fish that can be seven kilometres long, one and a half kilometres wide and thirty metres deep. Only half the number of sardines will reach their destination. Hundreds of spectators enjoy the spectacle, which includes dolphins leaping and the fins of sharks cutting through the surface of the water. However, perhaps the most amazing aspect of the display is the behaviour of seagulls and cormorants: by dive-bombing the water as deep as twenty metres they make it an epic food festival.

Skala Kallonis has no such run, but all over Greece it is known for its sardines. I am glad it doesn’t happen here because we might also see sharks in pursuit of the shoals, which would mean I would no longer feel safe in the waters around this island. It is claimed that there are sharks in the Aegean, but they stay far away from the shore, and are said not to be dangerous.

Dolphins can be seen regularly off Lesbos and they too are no friends of the sardine. Just before World War I in the fishing port of Collioure on the Mediterranean coast of France fishermen declared war on dolphins, because, even before they could haul in their cotton nets, these mighty predators would destroy the nets to get at the catch. So they killed the dolphins with machine guns! After the war, when nets were made of nylon the problem went away: because they couldn’t rip into plastic netting dolphins no longer came after the sardines.

In Greece however, dolphins are considered mythical creatures and Greek fisherman keep away from them. Killing them is said to bring very bad luck. Even if a dolphin gets caught in a net by accident it still means bad times ahead.

Last week I noticed a lot of splashing in the sea and I thought: it must be dolphins, but when I looked through binoculars I saw huge silver fish jumping straight out of the water: tuna! They must have been on a run because I could see small fish jumping out of the water to get away from them. I assume they were not all lucky enough to escape because the tuna were so wildly excited they kept on leaping out of the sea and pirouetting on their tails.

Skala Kallonis has an annual two day sardine festival which this year took place last weekend. I doubt that as much as millions of sardines disappeared into the stomachs of visitors to the festival, rather some ten thousand, which is as much as a whale does take in in one bite! The eating of sardines at the Skala Kallonis festival is accompanied by music, traditional dance, and of course lots of ouzo

During the summer months fresh sardines from the gulf of Kalloni are plentiful. They are served grilled, baked or salted (sardeles pastes) but at other times of the year you have to make do with the tinned variety. Mind you, the famous tinned sardines from Kalloni are preserved in salt, so you should treat them as you would anchovies in cans.

In the local restaurants there is not a great variety of sardine dishes on offer. Although I say I could eat grilled sardines every night – and my ouzo prefers an accompaniment of sardeles pastes – even though they are healthy and tasty fish, after a while even sardines would get boring. However, there are so many different recipes on the internet you could keep your sardine appetite going forever: grilled in vine leaves (or served with fried vine leaves), in a salad with chick peas and avocado, in a mousse or a pie with a mustard sauce, with pesto, in a curry, marinated or stuffed sardines, and so on.

I intend to try out all these recipes in time, but as we are still enduring a seemingly endless humid heat wave, I will make do with my own recipe for a sardine snack to go with drinks. It’s easy and quick to prepare, especially if you have a few sardines left over: it’s a sardine cream served on slices of cucumber.

For 1 cucumber in slices: mix a tablespoon of Greek yoghurt with two tablespoons of mayonnaise and a small spoonful of mustard. Crush about ten sardines (grilled or in oil from a tin) and mix together with the mayonnaise. Add some capers or pickles and cut in tiny pieces. Add some fresh lemon juice, salt and pepper and that’s it!