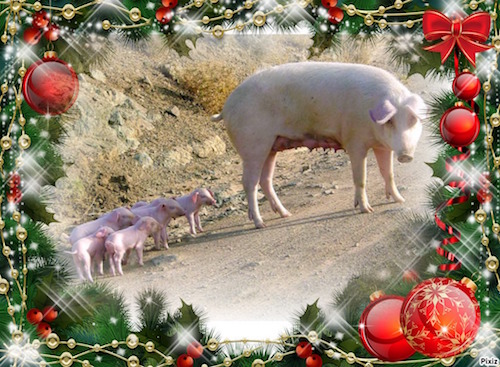 The advantage of corona might be that the Christmas stress for the Christmas Cook might be tempered, because officially you may not cook for grand companies. However, a Christmas Menu still has to be composed, although this corona year it maybe not be as abundant as years previous

In the United States turkeys are sacrificed for christmas dinner, in other countries game may appear upon the festivity tables, in Greece it is a pig that gets slaughtered for Christmas: gourounochara, that oddly enough means pig happiness. It is, according to a very old tradition, when farmers took in a pig to grow it fat for Christmas dinner. Speaking about Christmas stress, in those ancient times I wouldn’t want to be the one responsible in the kitchen, because ‘all’ of the pig got used, from the bones to make a broth, the skin to fabricate shoes, to the hair used for brushes. And then there is the meat, that gets turned into many things like sausages or jelly.

The many possibilities of a slaughtered pig still echoes in contemporary Greek Christmas dishes, which are different in all regions: in the Dodecanese, North Greece and Epirus minced meat is made to stuff cabbage leaves (lachanodolmades), on Samos cured pork belly is eaten and from the head is made a jelly (pichti). In Thrace the custom is to eat stuffed pork balls (bambo).

All over the country the meat is cooked differently, with various vegetables. On Crete the shoulder gets baked in the oven, hidden under a bunch of lemon leaves and they eat cured sausages (apaki), in Trikala the pork is roasted with potatoes (gournada),on Lesvos it is a pork stew with celery (xoirinó me sélino)

At the Christmas table there always should be the Christmas bread (Christopsomo or Kouloura), a round white bread, decorated with a cross and sesame seed. Nice decorations are necessary on the bread because they offer good luck, fortune and prosperity: the cross symbolizes the divine power. The dough is enriched with special ingredients like rose water, honey, cinnamon and cloves. Tradition is that the eldest of the family cuts the bread, after having incised a cross in the bread.

I am without traditions for the Christmas menu, nor am I expert at cooking meat. This year I’ll go to the local butcher, who makes roulades on demand. For the roulade I opt for a spicy chocolate sauce and quince jelly. As one of the starters I will serve a beetroot salad. The chocolate mousse might be my only traditional Christmas dish, following a recipe of my mother (she called it Heaven’s mud). I had intended to make a Jellyfish pudding (the name we used as kids for a jelly pudding) of pomegranate juice, but the little amount of guests begged for the chocolate mud.

A happy Christmas and a healthy 2021.

Cut the beetroots and avocados in small dices, the eggs in slices. Put all in a salad bowl. Season with some salt and pepper. Add the orange in half parts and figs. Mix the yoghurt, mayonnaise and mustard and add the sauce just before serving to the salad.

Melt the chocolate in a bain marie. Separate the egg white from the yolk, the egg white in a mixing bowl, the yolk in a serving bowl. Add 1 of sugar (pp) to the egg white and mix it with a machine until it is stiff. Add 1 tbsp (pp) of sugar, the nescafe and cognac to the yolk and stir until it is nearly stiff. Pour the melted chocolate slowly, while stirring, to the yolk. Gently mix the egg white through the mass and put away in the fridge for some hours to set. Eventually serve with whipped cream.

Soak the gelatin (according to the instructions) in cold water. Warm the pomegranate juice with the sugar until it nearly boils. Take off the fire and stir the gelatin through the juice. When all is melted add the lemon juice and pour the juice in a jelly mould or serving bowl. Put away for some hours in the fridge to get firm. Deposit the pudding from the form on a serving plate or keep it in the serving bowl. Serve with whipped cream.